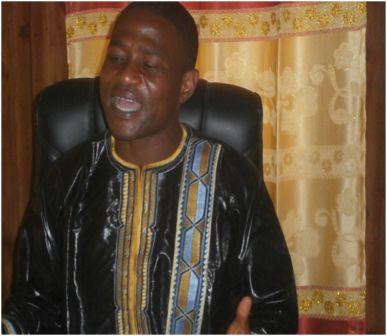 The truth is that, the Alliance Democratic Party (ADP) Chairman and Leader, Mohamed Kamarainba Mansaray has listened to the voices of Sierra Leoneans by publicly declaring his assets as demanded by the 2018 elections citizens’ manifesto that was launched at the Miatta Conference Centre in Freetown.  (Photo: ADP Chairman and Leader, Mohamed K. Mansaray)

But what is not clear to citizens is that the ADP Leader displayed physical cash in the full view of the media at the Sierra Leone Association of Journalists (SLAJ) headquarters on Campbell Street worth Le15.8B where he also bragged that he owned five houses in America, two in Sierra Leone with several expensive vehicles but no investment or business outlet where Sierra Leoneans supposed to have survived.

So what Kamarainba, who is so ambitious to be next President, is telling Sierra Leoneans when he never created any job opportunity which, young people are yearning to see?

Although Mansaray is often bragging that he will bring opportunity and Agenda for Jobs if he becomes President of Sierra Leone but there is no sign to prove that the ADP Chairman and Leader is a trustworthy citizen when he invested immensely in foreign land while isolating his people to languish in abject poverty.

Erudite and meaningful Sierra Leoneans have described Kamarainba as not the type of politician this country is searching for at this crucial moment for the fact that he has no legacy to boast of except his burnt office which he is still crippling to erect.

According to discussion from various facets in society, Kamarainba’s declaration drive is good for the citizen’s manifesto but it gives no benefit to the poor people of this country who are going to vote for the candidate of their choice in the forthcoming elections.

Some people argued that Kamarainba is only forcing himself with fake propaganda to be known among Sierra Leoneans but he is still finding it extremely difficult to win the hearts of Sierra Leoneans because they have little trust in him as a man who talks a lot and does little or nothing.

The other bad side of this episode is that Kamarainba has been accused on several occasions as performing double standard roles in his party as he is acting the roles of Spokesperson, Financial Secretary among others instead of allowing other people to perform other tasks.

Kamarainba has demonstrated his insincerity against his staff on many press briefings that were held at his party office before it was set ablaze by sharing transportation returns among Journalists after delivering long speech that made Journalists feel like sleeping instead of dedicating the task to a junior staff.

Although Kamarainba has been denying that he is never an APC member and challenged anyone to provide tangible evidence that could identify him as a former member of the incumbent party but on the contrary, other members of the ruling party advanced that Kamarainba targeted the APC party and Government because his request to succeed President Koroma was turned down. Since then, Kamarainba became bitter enemy against a party he has allegedly served as Diaspora executive member.

Sierra Leoneans are therefore calling on the bogus ADP Leader and Chairman to make visible investments in the country first before entering in to politics because they can only vote for a person or political party that have done many vital things that have transformed lives of many people. In fact that is the reason many emerging political parties hardly win elections because they have nothing to showcase among electorates to vote for them.

Hassan Manso Kargbo to Declare on...