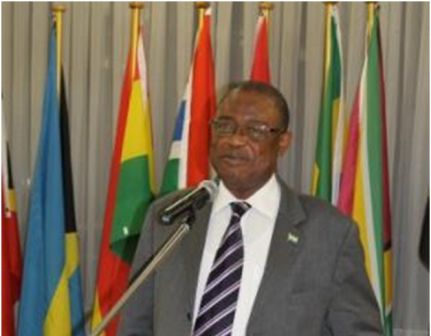 The Minister of Agriculture Forestry and Food Security (MAFFS), Prof Patrick Monty Jones is calling on Sierra Leoneans to embrace Agriculture to benefit from the natural riches in the soil.

He made this disclosure in a press conference held at the ministry’s Conference Hall, Youyi building in Freetown to tell the nation that it has registered it first bumper harvest in rice cultivation.

The minister added that seven villages at the Mabash, Tonkolili District in the northern part of Sierra Leone, cultivated two thousand and Fifty hectares through the direct cash transfer instituted by the ministry years back noting that similar bumper harvest was also recorded by the Earnest Bai Koroma’s Women Farmers Association in the Gbanti Chiefdom which he pointed is an indication that the nation is getting close to food sufficiency.

Prof. Jones also noted that eight Minis combine harvesters with fifteen technical staff from the ministry and a specialist who is currently at Mabash in the Tonkolili District to help farmers have successful harvest and also train them on how to use modern machines or implements.

He pointed out that since 1960-1970; Sierra Leone continues to be in food shortage with a hundred and sixty million dollars spent on importation of rice annually.

Prof. Monty Jones promised continuity of direct cash transfer to farmers groups as incentive to stimulate yield, performance and competition among farmers who the minister described as cannot be unconnected to the reason for the twenty two thousand youths across the country directly engaged in agriculture.

Prof Monty Jones said agriculture contributed 45 percent of the country’s Gross Domestic Product (GDP) which he identified as he intension to raise 70 percent bumper harvest  in 2018,  stressing that if such bumper harvest continues, the minister will advise government to reduce the amount of money spent on rice importation.