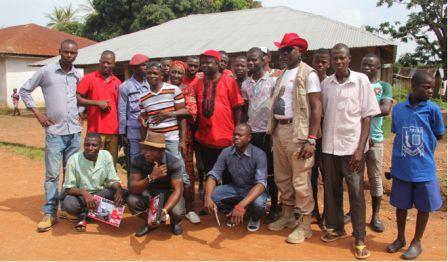 An aspirant for the All People’s Congress symbol for constituency 034 (Safroko Limba and Pakimasabong chiefdoms) has said, should he be awarded the symbol, he would ensure an effective representation in the House of Parliament. (Photo: John Baimba and supporters in Safroko)

John Baimba Sesay, Sierra Leone’s Press Attaché to China made this statement on Friday, 20th October, 2017, in  Binkolo (chiefdom headquarter for Safroko) during a consultative tour to Safroko Limba and Pakimasabong chiefdoms, seeking  support  for the award of the APC symbol.

In Binkolo, chiefdom headquarter town for Safroko, Sesay addressed dozens of Bike Riders and donated 20 bags of cement to them for the construction of their office space. In Mapaki, (chiefdom headquarter for Pakimasabong), he had consultation with stakeholders and community elders.

Speaking in both chiefdoms separately, Sesay said, much as the role of MPs is clear as per the 1991 constitution, there is also the need for a closer link between a Member of Parliament and his constituents. “The level of representation should also be felt by way of one’s contribution to debates on national issues in the well of Parliament. One should not just be seen, but be heard,” he said.

Sesay promised to work closely with the constituency stakeholders especially councilors as they are also vital given their roles as outlined by the Local Government Act especially in terms of facilitating development.

He called on youths in a number of villages visited in the two chiefdoms to discourage violence in every form and to embrace any aspirant visiting them, since “all of us seeking the APC symbol have two things in common; wanting to represent the constituency, and seeking development for it.”

Addressing Bike Riders in Binkolo, he said, youths are a major component to the growth process of the constituency and that whatever they are engaged in, they should act positively and in tandem with the development efforts of the chiefdom.  Education, he said, is the corner stone to growth and as such, notwithstanding the challenges they are faced with, youths must not relent in their education pursuit.

John Baimba Sesay further called on people in both chiefdoms to work assiduously in ensuring the APC wins the coming elections. “We have our presidential flag bearer and his running mate and they are both of good repute with clean records. It is our duty to work collectively to ensure victory” Sesay said.

He promised to work with and support whosoever is awarded the symbol, though expressing optimism of clinching it since he believes in grassroot politics and has been with the people seeking their unflinching support. “Young people have huge potentials in the Party and we must be seen rising to the challenge,” he said.