Homepages
Your trusted place for Sierra Leone and global news
Trending News
HomeCommentaryOped: The Ajisafe in us 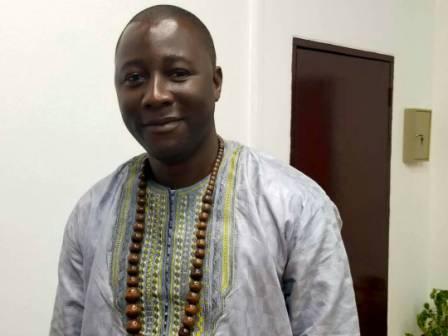 Whether you love him or loathe him, the name, Pastor Victor Ajisafe, the Nigerian-born preacher of the Sanctuary Praise Church at King Harman Road in Freetown has sometimes generated controversies. For his disciples though, controversies have not stopped them from flocking in. Journalist and former government Minister, Sheka Tarawallie (Shekito) in May 2002 wrote:  “the moment you meet him, you could not resist being attracted to this preacher man. Literally, the word of God is in his mouth. When you visit his Sanctuary Praise Church – which I am tempted to call a Cathedral – you will know that God is at work.”  (Photo: Osman Benk Sankoh, author)

A friend of mine once made the church’s revival slogan “Let my gates be opened,” his pastime, much to the suspicion of his fiancée who was out of the country. Each time she called, my dear friend would say he was in church listening to the man of God. No doubt my friend is religious but I cannot vouch that he was moved by the message or to get acquainted to the largely female congregation.

Yet those who have been following the firebrand preacher are quick to point out his frailties. Lans Gberie writes in a recent piece published by Concord Times: “After a bloody coup in 1997, Ajasafe transformed himself into a ‘spiritual adviser,’ of Johnny Paul Koroma, the demented, arm-chopping leader of the Armed Forces Ruling (Revolutionary) Council. For close to a year, he held open-sermons rousing Freetown churchgoers, cowered by the depredations of Koroma’s soldiers, to support the junta as the new God-anointed rulers of the country.”

Lans was not done. “In 2008, Ajisafe shoved himself into the news again when he was, along with three other members of his church, accused in a magistrate court of malicious damage for breaking a wall fencing a building on King Harman Road in Freetown, close to his ‘Sanctuary’.”

If that was a thing of the past, his recent controversy that has got everyone talking, over comments he made against the visiting Zimbabwean sheikh, Ismail Ibn Musa Menk also known as Mufti Menk and Islam have pricked the conscience of the nation. Everyone wants to be an Historian, quick to be grave-diggers of human past to tell us what Ajasafe had done. Some have made themselves judges or policeman calling for his head. Others want him locked up at Pademba road prison and the keys thrown over the sea. Because, he is Nigerian, others have called for his deportation. In this milieu of confusion, our patriotism or view points on issues have been tested.

Make no mistake. The Pastor has erred. He has thrown a missile on the very religious tolerance, the best export Sierra Leone continues to offer to the rest of the world. Ajisafe’s vitriol has no place in society and I am happy that the entire nation has been condemnatory of his actions. Last night, the pastor slept in a cell at the CID. This probably may have given him some pause to reflect on the consequences of his acidic tongue to his congregation the other day. The matter is now with the Police. They may proffer charges. The pastor may have his day in court and what happens next, it will be for the courts to decide.

Like Ajisafe, Mufti Mink himself has had his own fair share of controversies. In November 2003, the Telegraph, a UK newspaper, reported that Leeds, Cardiff and Glasgow universities were forced to disinvite the Imam over complaints of anti-gay viewpoints. According to the Telegraph, the Mufti had said that gays were worse than animals.” He had branded homosexual behavior filthy, according to the paper.

To the gay community, this was probably his own Ajisafe moment. In Freetown though, his message was one of peace and unity.

Sierra Leoneans are very passionate people. On this matter, we have seen the passion demonstrated at rapid speed to show that we will not allow such hate preaching to define us as a nation.

I wish such emotion is also demonstrated on other issues of national concern. You may not want to hear this, but all of us, one way or the other, have some Ajisafe in us. We mostly tend to look at things from our own lenses, from our religious, tribal or regional grouping, from the school or colleges that we attended; It’s always “us Vs them”.

Let us confront the facts: when I was at college, some of us were called “underprivileged” because those calling us those names could afford to go to the canteen three times a day and not waste their time at 3rd World (the shopping area at FBC) for food. They probably wore the best dresses to class and mostly dated the best girls on campus.

We, on the other hand, looked down on them politically. We boasted that we had the greatest minds to effect positive change on campus.  Fourah Bay College was and probably is, a ‘Whiteman’ versus ‘Blackman’s world. Those who attended the university know exactly what I am talking about. Was it the Ajasafe in us?

Politically, the struggle has always been how we look beyond our regional or tribal biases. I have heard people say as long as it is a Mende man running for president they will never support him or her. The same has been said of Themnes or Limbas. In our own comfort zones, we sometimes say the most acidic things about tribes that we do not belong to. Spare a moment if such recordings are made public.

Recently, after my interview with John Bonoh Sisay was published, someone on social media went on the attack. Osman Benk Sankoh is a northerner and northerners will never support a candidate from the South East, the person posted. For him, I was campaigning for Sisay. Well, I have done a series of such interviews, including with candidates from across the political divide.

Ajisafe might have used his pulpit to inject hard feelings into our conscience- Christians and Muslims alike – but most of us do the same thing behind the comfort of social media.

We complain that corruption is the biggest cancer in the nation. However, whenever the Anti-Corruption Corruption takes its stance and arrests one of our own, we are very quick to put up a defense. We do not look at the crime, but rather, our vested interest. Sometimes, we close our eyes and ears to the truth.

I could go on and on and on but the truth is, we all have some Ajasafe in us. The good thing is, Pastor Victor Ajisafe’s vitriol in the form of a sermon has in a way helped to bring us together to once again cement our ties for religious tolerance. Can we therefore use that same passion to call government’s attention to other pressing issues? Can we give them a pat on the back for some good they might have done? Should they fail to address our basic needs, are we ready to tell them so? Do we want to examine ourselves by putting country first and not partisan, religious, tribal, ethnic or ‘me mannism’ interest first?  Should we fail to do so, are we not as guilty as Pastor Victor Ajisafe?