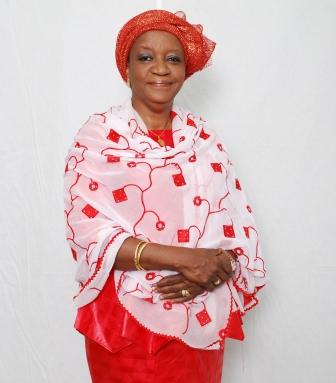 Vintage Zainab Hawa Bangura, the insurance broker turned civil society activist; the UN technocrat; the former government minister; the mother- the ‘everyday  Yonibana’ woman who would gather the kids, arrange them in circles, clap, sing and dance to themne folklore until 2:00 A.M; and now, a contender for a ticket for President. She was home somewhere in Aberdeen and ready for breakfast when I met her.

I was struck by some of the picture frames in her living room. “She believed she could. So, she did,” caught my attention. Surprised? For someone whose dad was an Imam with many children and wives and did not believe in the values of western education for the girl child; whose school fees up to ‘O’ Levels were paid through debts- Zainab’s mum, Ya Sama sometimes sold her ‘lappas’ and constantly requested payment deferments just to ensure her daughter is not thrown out of class. Zainab, to the relief of her mum, later received a government scholarship to study at Fourah Bay College. And later, she became a successful career UN staffer, rising to the position of Under-Secretary-General. She was also Minister of Foreign Affairs and later Health. The trajectory of her life’s journey encapsulates the triumph of the human spirit.

After four years in New York as the UN Secretary-General’s Representative on Sexual Violence in Conflict, Zainab, the devout Muslim who has performed the Holy Pilgrimage to Mecca, is back home in Sierra Leone. For the second time, she thought about running for president. She did the same reflections in 2002 when she consulted with her late husband, Sheki Bangura, her young son then and constituents. Back then, she formed the Movement for Progress (MOP) party to run against the late Ahmad Tejan Kabbah. She lost that election. This time, she resigned her job at the UN – retired but not tired. Zainab believes she can pull it off and become Sierra Leone’s first female President under the ticket of the APC.

She invited me for breakfast on the day that we met. I was more interested in the book on the table- “How to Run A Country,” by Marcus Tullius Cicero. Its chapters include: Natural Law, Balance of Power, Leadership, Friends and Enemies, Persuasion, Compromise and so on. Apparently getting herself prepared for the task at hand, she said she has also been reading other books like; “How to form a cabinet,” and another on how to work or deal with the civil Service.

“Let your faith be bigger than your fear,” reads an inscription on what looked like a wooden carving. Were Zainab to dismantle a vast field of APC male -dominated contenders and ultimately win the presidency, she needs her faith to be bigger and higher than Mount Everest. She said going through the war in Sierra Leone as a civil society activist, in Liberia as Chief of Civil Affairs where she headed the largest Section in the Mission with a recognized staff of 88 in all fifteen counties and tasked with providing support to the restoration and extension of state authority and in Sierra Leone as a government Minister, helped her a great deal as the UN SG’s envoy on Sexual Violence.

As a victim of conflict herself, Zainab identified the culture of silence and denial, knowing that victims of sexual violence were not only women but men as well. “It was stressful, painful and it required working a lot with the Security Council on a daily basis.”

Making the issue of sexual violence in conflict a global issue, being among the first people to call attention to the terrible things ISIS was doing to the Yazidis in Syria, working closely with the International Criminal Court and making the issue a foreign policy, developmental, health and a humanitarian one were some of her success stories. “I witnessed the pain and suffering of women that had gone through this. I cried with them. I became their voice,” she tells me.

She narrates a story of the woman she met at a hospital in the DRC, raped by five men, got pregnant, delivered and every time she sees the baby, she gets mad. Having been away for four years, Haja Zainab says: “I’m rediscovering myself back home. It is interesting settling back and trying to fit in. I have travelled a lot, trying to learn about my country.” In her travels around the country, she notes the progress made in energy and infrastructure but also seen firsthand the challenges in education, health, the huge number of unemployed youth and those not in school.

She waxed poetic on what she calls the ZHB’s 6 triggers to unlocking the doors of resilient growth in Sierra Leone and enhancing continued delivery of the Agenda for Prosperity. On the top of her bucket list are; strengthening the Rule of Law; building efficient, effective and independent institutions; completely decentralizing the government ; setting up a robust fiscal regime and initiating a prudent revenue management mechanism; focusing on trade and exploiting regional opportunities, and building a revamped system for data collection , management and access to information. The ‘howness,’ one may want to know- under the framework that her party, the APC has put in place because she believes that the Agenda for Prosperity is transformative.

Zainab became famous in Sierra Leone when in the midst of a brutal civil war in 1995 and in 1996, she led hundreds of women to the Bintumani Conference (National Consultative Conference) and using their voices and their ‘lappas,’ they challenged the ruling military junta to quickly conduct democratic elections and handover to a civilian. We reminisced about those days. She still couldn’t find answers to what gave her the courage to defy the military. She has no regrets for her actions. She was excited and adventurous, and she believes in predestination.

In 2002 when she contested against Kabbah, she knew the odds were stacked against her. “I knew I was not going to win. I hoped for a seat in Parliament.” Now, ZHB says “I’m matured, realistic and things could be different.” She realizes that the country is now at a development phase and she is a strong proponent of the Agenda for Change and Agenda for Prosperity programmes of the APC. She is a practical person as well. If she is president, she will continue to evaluate what the government has achieved

For the woman who admires President Ellen Johnson-Sirleaf of Liberia, Hillary Clinton and Angela Markel of Germany, she would not play the woman card. She says she is not contesting as a woman although she is a proud African woman and a mother. For her, the world is a classroom and she continues to read and learn a lot every day.

Having traversed the length and breadth of the globe, this lover of jazz and country music says that “Yonibana (in Tonkolili district) is the best place in the world. That is where I am Zainab. They don’t judge me. I eat, cook and play with the kids. That is where I’m at my best and when I die, I want to be buried in Yonibana.”

ZHB has all the accomplishments, the qualifications and experience to be a leader of a country, many people believe. She has four Honorary PHDs. New African Magazine names her in 2015 one of 100 Most Influential Africans; BBC 100 Women profiled her in2014 and Foreign Policy Magazine 100 listed her as a Leading Global Thinker. Reducing her story to a little over a thousand words is a difficult task.

The only woman with a realistic chance in the race, Zainab will have to defy the odds, like she has done throughout her life, to penetrate the somewhat patriarchal hegemony of her party. In just a few weeks, the party’s convention will be held in Makeni and the presidential candidate will be selected.

In Politics, Absurdity Is Not A Ha...