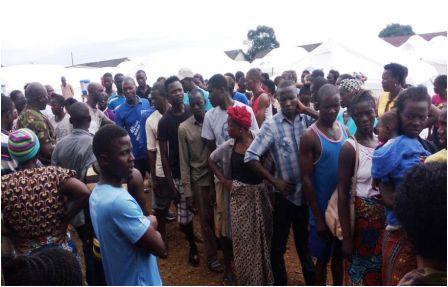 Since Sierra Leone suffered from the August 14 mudslide and flood disasters, thousands of people were rendered homeless, with no food to eat, or clothes to wear. The Government thought it necessary to relocate the affected population to Juba Barracks and Old School Complex respectively as a temporary measure to address the housing and health needs of the victims.

By way of addressing the numerous challenges faced by these victims a humanitarian organization called Partnership for Justice yesterday provided support to the affected population that have been relocated to the Juba Barracks. This new arrangement in the Juba Barracks is currently accommodating close to a thousand victims in make shift structures established by Government and its partners. Partnership for justice is Human Rights based organization that promotes and protects Human Rights by impacting public policy, social Change and provision of innovative range of services to achieve equality and justice in Sierra Leone.

The Organization is headed by a Managing Partner- Mr. John Paul Bai who has been involved in development work for years. According to Mr. Paul Bai during the donation ceremony on the 13th September 2017, the organization is complementing the effort of Government and its partners in addressing the daunting challenges faced by victims of the mudslide. He added that the support they are providing is as a result of the effort of the Board Chairman, an outstanding legal luminary Mr. Prince Goba who is based in the United Kingdom. Due to Mr. Goba’s tireless effort in servicing the Sierra Leone populace in the UK, he was able to mobilize Sierra Leoneans for this laudable initiative by establishing a disaster forum campaign.

The support provided targeted one hundred and two households which include young men, women, children and the elderly. The support included bales of used clothing (junks), Cartoons of baby food (Cerelac), boxes of pampers, cartoons of slippers and cash support to one hundred and two household heads amounting to millions of Leones. According to the Camp Manager Captain D.A.K. Sesay, Partnership for Justice’s intervention is a welcoming one, as most of the recipients or victims were very happy since they were in dire need of pampers and baby food for their babies.