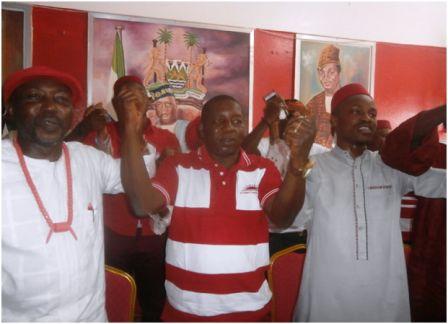 Business magnet and philanthropist, Dr. Tunde Macarthy who is the Chief Executive Officer (CEO), TUMAC Group of Companies based in the eastern part of Freetown has on September 15th 2017 painted Freetown red with thousands of supporters of the All Peoples Congress (APC) party in their red T-Shirts bearing inscriptions like “TUMAC APC”.  (Photo: TUMAC flanked by Falley and Dauda Bangura)

Speaking on behalf of the All Peoples Congress (APC), National Publicity Secretary two (ii), Hon. Robin Falley said the high turnout of young and energetic people to the occasion is a clear indication that victory is coming in to the APC party which he described as not only for grassroots but for all classes of people for the fact that it is developmentally oriented.

The APC mouthpiece prayed for God’s blessing to continue prevailing among members of the party adding that “You are behind TUMAC because you see hope in him”, said the Publicity Secretary and described the event as one of the biggest day for APC members.

He discussed that TUMAC is a God sent man to redeem the people from abject poverty and misfortune. He noted that he and TUMAC are Doctors and mentioned that they came in to politics not for money but to change lives of vulnerable people. According to Falley, TUMAC informed him about his intention to officially declare or joins politics under the APC which have been described as a grassroots party two years back.

“He is a transformational leader capable of providing necessary measures to control any situation” said Falley and disclosed that TUMAC is a leader that has the ability to provide jobs for young people in the country. He described President Koroma as best Coach in the world.

In his brief statement, the youngest Commissioner, Independent Media Commission (IMC), Alhaji Dauda Bangura aka Galaxy who described Hon. Robin Falley as the Midfielder in the Sierra Leone politics stated that the Business Tycoon has made lasting history in the eastern part of Freetown and the country at large. He emphasized on the importance for the whole country to know about the good work of TUMAC.

He pointed out that, APC is a social gathering that is always ensuring that peace, unity and stability be prioritized and sensitized the crowd that, Robbin Falley was a former Member of Parliament under the SLPP.

Galaxy explained that President Dr. Ernest Bai Koroma has set to officially receive Dr. Macarthy on Tuesday 19th September 2017 with millions of supporters of the APC at the party’s headquarters offices on Old Railway Line, Tengbe Town in Freetown.