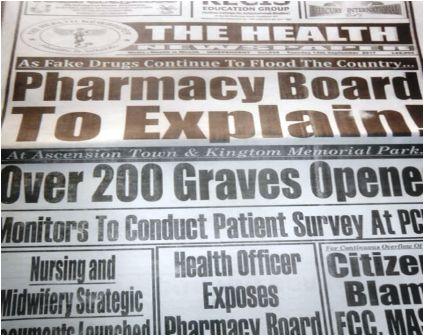 Thursday 7th September, 2017 marked the first year when the Health Newspaper hits the newsstand in the country especially in the capital Freetown where all newspapers are published.

It is a weekly publication that focuses primarily on health related issues, human interest stories, sports and many more.

As you could recall, the health of the nation was brought in to0 sharp focus following the outbreak of the Ebola virus Disease in May 2014. As the disease ravaged the country, it became immediate clear that existing information channels were inadequate to disseminate lifesaving information to the public.

In a bid to fill this information void, suddenly everybody became an authority on Ebola. Thus it was during this period the public became inundated with too much information, much of which was not only unhelpful but in fact detrimental to public health.

Against this background, we at The Health Newspaper plan to serve the general public by taking on health issues available in a responsible manner for the benefit of us all. We will report on Government activities so as to bring their Government closer to the people on health issues. The public needs to be informed on the healthcare services that are available in Government hospitals as well as the state of these facilities.

Often there is a disconnect between the Ministry of Health and Sanitation and the Healthcare Officers who are employ top serve the people so much so that well-meaning Government programs are rendered ineffective due to poor implementation.