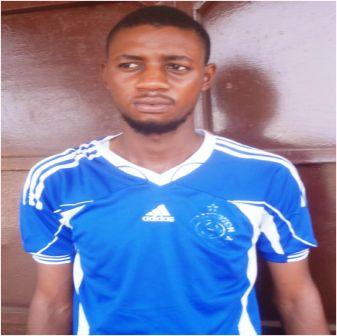 One of the popular film production industries based at Wellington, Freetown, Sierra Leone, Janneh Movie Production which has recently premiered a new film titled “In the Closet” has excelled in the Sierra Leone entertainment industry.

Speaking to this medium, the Executive Producer, Director, script writer and an actor, Mohamed Janneh (in phogto) maintained that Janneh Movie Production was established in 2011 in the midst of unavoidable challenges.

He disclosed that he produced his first film titled “Black Stone” in 2014 as a new gentleman in the move world featuring two local entertainers including Glamour and a female actress. He discussed about a movie he produced with children which he said is appreciated by the public.

He encouraged new and young actors/actresses to create positive things and trust in themselves. He appealed to script writers to be patient in writing so that they can do things beyond imagination.   He spoke on the important of producing good pictures that would distinguish between city and village movies. He deliberated on the importance to have passion for the art before becoming an actor/actress.

He lauded actors and actresses in the Janneh Film Production because he said; they are admired by the public for their passion to promote local entertainment industry adding that one of his actresses, Isata Foray has been nominated for an award as an influential actress. “That gives me zeal to introduce more young people in to the industry”, said Janneh and mentioned that his production comprised twenty influential actors and actresses with quality input.

“We need Government and public support to push the industry forward”, said Janneh and confessed that the backwardness of the movie industry in Sierra Leone cannot be unconnected to the disorderliness among people in the sector. He stated that they wanted to approach the market systematically to avoid doing things in a rush manner that would lead to poor production.

Janneh said, he is doing everything out of his own little as an Executive Producer without any external support and described the country’s entertainment industry as not easy for the fact that the needed support is not given to them by Government through the Ministry of Tourism and Cultural Affairs.