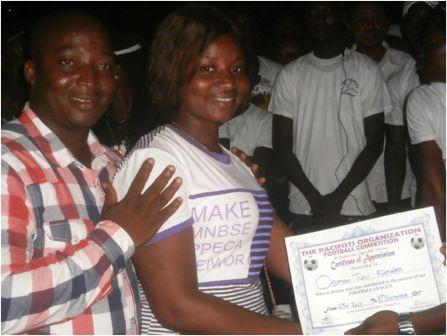 Many people are describing Osman Tunie Kamara as the redeemer for the inhabitants of Constituency 105/123 as a result of his stance to uplift societies even before he declares intention to contest for the Parliamentary symbol under the ruling All Peoples Congress (APC) party. (Photo: Osman Tunie Kamara and Wife, Mariama Kamara receiving certificate of appreciation on behalf of her husband)

The Honorable awaiting joins the country political bandwagon to answer to the general appeal made by members of the public to represent them in Parliament in the 2018 Parliamentary election because according to residents, Kamara has demonstrated the love he has for the people through his philanthropic gesture he is making within and outside the constituency.

The people’s desire is Osman Tunie Kamara to rule them because he has exhibited leadership quality in many occasions and he is believed among constituents because he does what he says. Kamara has the support of young people because he is working in consonant with them.

The energetic Youngman normally expresses the saying that the future of the country lies in the hands of young people. In fact that is the reason he is paying much attention in the area of supporting youthful activities.

Osman Tunie Kamara never frown his face on people despite the huge challenges he normally faced in always trying to find possible solutions to address the overwhelming problems coming his way on daily basis.

Recently Chairman Tunie gives out over ten scholarships to school children and splashed millions of Leones to support young people who are interested in playing Football.

Above all, Kamara is confident that he will be given the symbol as a result of the high number of people who have pledged their unflinching support to the awaiting Member of Parliament.

Over Breach of Supreme Court Rulin...