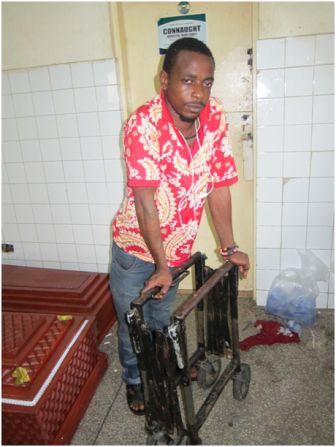 Former Ebola Volunteer, Mr. Joseph Crown (in photo), who was working with the Burial Team when the deadly Ebola Virus Disease (EVD) Struck In May 2014,has appealed to president Dr.Ernest Bai Koroma for medical attention.

According to the former Ebola Volunteer, he sustained serious injury in his left hip when a heavy casket hit him during an internment of an Ebola corpse at the Kissy mess-mess memorial park in the eastern part of Freetown.

Mr. Crown disclosed that he was working in team two of zone three as a stretcher bearer with concern worldwide at the time of the incident.

He expressed disappointment that nobody has come to his aid despite the fact that he is undergoing serious health implications that has made him partially deformed and can no longer walk upright. ”It was during this national service to my country and people that I sustained the injury,” Mr. Crown lamented.

He added that it was due to the emergency call by president during the height of the Ebola outbreak that prompted him to offer himself as volunteer worker.

Mr. Crown reportedly underwent a CT scanning test at the Connaught Hospital and that a specialist orthopedic doctor advised that he require a total hip replacement abroad which involves colossal money he can ill-afford to raise. He therefore appealed to the Government and the general public to rescue him from his current predicament.

Mr. Crown, who is a young man in his early thirties, gave his contacts address and numbers as 34 Liverpool Street, Freetown and Connaught mortuary department or call 099-079435/076-762287.