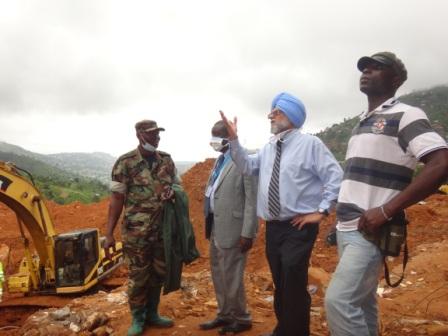 The World Bank Country Manager for Sierra Leone, Parminder Brar, Thursday visited the Martomeh community at Regent, the scene of Monday’s deadly mudslide that claimed the lives of hundreds of residents and completely razed to the ground dozens of houses. (Photo: World Bank country boss, Parminder Brar, watches with disbelief at the wanton destruction caused by the dreaded mudslide)

Mr. Brar, who arrived in Freetown on Wednesday, cutting short his leave in India to lead the Bank’s intervention in assisting the government to deal with the tragedy, was appalled by the level destruction and colossal loss of lives and properties.

He was joined at the scene by the new UNICEF Representative in Sierra Leone, Dr. Hamid El-Bashir Ibrahim. They were taken around the ruins and saw firsthand the extent of destruction caused by the mudslide.

A large section of Sugar Loaf mountain had collapsed following heavy rains. It created a deadly mixture of wet mud and boulders the sizes of large houses that smashed everything in its path. This not only wiped out Martomeh community at the foot of the mountain, but all homes and communities living close to the riverbed – all the way till the stream enters the ocean.

The affected area is close to a major reservoir supplying water to Freetown. The main water pipe was cut and the pumping station damaged. Due to this, a large portion of Freetown is without water.

A body had just been recovered from under the rubble by the team of volunteers and the military when the diplomats arrived. Because the body was already decomposing, it had to be hurriedly conveyed by one of the waiting ambulances to the Connaught Hospital mortuary. Dozens of bodies are expected to be buried under the mountain of mud and boulders. This has raised the risk of contamination of the water table and also greatly increased the risk of cholera.

Dozens of boulders and mounds of mud, which gave way from the mountain top due to days of heavy downpour, and descended on the sleeping residents, have now replaced the magnificent structures that once beautified that burgeoning community. The atmosphere was somber as people tried to come to terms with the tragedy that has befallen their community.

The disaster site is being heavily guarded by personnel of the Republic of Sierra Leone Armed Forces (RSLAF), who are also helping with the recovery of bodies still believed to be buried under the rubble. Several centers set up to register affected residents dot the grieving community, which apparently is turning into a “tourist attraction” as hundreds of people from all walks of life daily throng the area either to offer help or to see the wanton destruction done to a community which in recent years has seen the rise of a number of new buildings.

Among the destroyed property was a church which community people say was observing all-night prayers when the disaster struck around 6:00am.

Mr. Brar and Dr. Ibrahim were briefed by an RSLAF Captain who is coordinating the recovery efforts. The officer said they lack heavy moving machines to dislodge the giant boulders so that they could have access to the hundreds of bodies believed to be buried under the mud. What they have are diggers which could not lift the massive rocks that are scattered all over the area.

The Country Manager offered his condolences to the government and people of Sierra Leone for the disaster, and consoled the bereaved families for the loss of their loved ones. He said the Bank has received a request from the Government for support. A Disaster and Loss Assessment Team will be in town next week. The Bank stands ready to support the government as it deals with this tragedy.