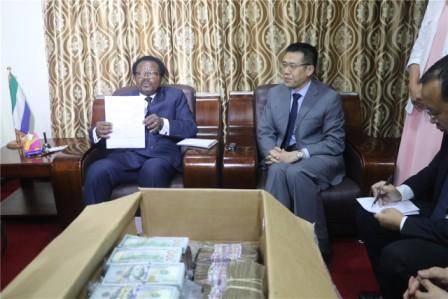 The Chinese community and Chinese companies in Sierra Leone comprising, the Chinese Chamber of Commerce, Sierra Leone Chinese Chamber of Commerce, CFS Co. Limited and the Chinese Business Community (Timber Association) have donated USD$ 88,860 and over Le 100 million cash and items such as 5 tons of rice, 2,000 boxes of water, 25 cartons of medicine, etc. to Vice President Victor Bockarie Foh for the support of the Sierra Leone government rescuing and disaster relief efforts of the August 14th tragic mudslide and flooding.

In attendance from the Chinese community were the Charge d’Affaires of the Chinese Embassy, Mr. WANG Xinmin, Economic and Commercial Counsellor SHEN Xiaokai of the Embassy, the Chairman of the Chinese Chamber of Commerce and the General Manager of Bintumani Hotel, Mr. ZHANG Wenguo, the Chairman of Sierra Leone Chinese Chamber of Commerce Mr. LI Luming, the Secretary General, Mrs. YI Ning and representatives of the various Chinese companies in Sierra Leone.

Charge d’Affaires of the Embassy WANG Xinmin offered condolences message on behalf of the Chinese government to the bereaved families of mudslide and flooding victims and the government of Sierra Leone while presenting the cash donation, food, water, clothes and other items to the Hon. Vice President.

He informed the Hon. Vice President that, Chinese companies like CRSG have dispatched heavy equipment to support the recover and rescue efforts of the Sierra Leone government. The Chinese medical personnel have also been participating in treating the victims around the disaster areas.

Vice President Foh expressed thanks and appreciation for the support from the Chinese community and Chinese companies noting that, as former Ambassador to China he understood and knew the Chinese to be very disciplined and that he was aware of the contribution of the Chinese doctors and heavy machines at the disaster-striken areas. He noted that China has always been first in supporting Sierra Leone in moment like the mudslide and flooding devastation and guaranteed to make good use of the donation on behalf of the victims and the expenses would be under close monitoring of the Sierra Leone government.

Gento is a square peg in a round h...