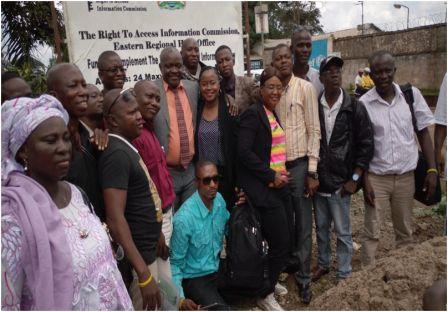 As part of government’s commitment to promoting the demand and supply of information among the general public, public authorities and the private sector, the Right to Access Information Commission Regional office for the Eastern part of Sierra Leone has on Monday 7th August 2017 officially opened to journalists and the general public and the office is situated along Maxwell Khobe Street in Kenema.  (Photo: The MLGRD, MOS-East, Commissioner RAIC & cross section journalists after the office launching of RAIC regional Office)

She said the Right to Access Information Commission Act was enacted by the Sierra Leone Parliament on 29th  October 2013 in consistent with Article 9 of the African Charter on Human Rights which provides for the right to seek, receive and impart information and ideas through various media channels regardless of borders in tandem with article 19 of the Universal Declaration of human rights and the international covenent on civil and political rights with the appropriate internationally accepted exemptions to protect individual privacy, safeguard national security, defence, customs and traditions among others. She further stated that the novel action under difficult circumstances promotes transparency, accountability and good governance which lays a solid foundation for sustained socio-economic development and make Sierra Leone a place where information access is relatively smooth so as to enhance sustained socio-economic economic development.

The eastern region commissioner reiterated that the commission is the performance of its function under the Act has the powers of the High court to administer oaths,undertake investigations of appropriate matters, enter any premises in the conduct of investigations,order the release of information and impose fines, imprisonment or both.

Mrs. Margaret Vandi Thoronka maintained that the commission is independent and not subjected to the directions or control of any person or authority in the performance of its functions under the Act. She pointed out that the RAIC has the statutory mandate to promote access to information held by or under the control of public authorities whilst the private sector has the mandatory obligation in the Right to Access Information Commission to disclose information to the general public if that information is required for the protection or enforcement of any right.

The Minister of Local Government and Rural Development Hon. Maya Moiwo Kaikai stressed that the values of the Act are to request openness, fairness, swiftness, transparency, accountability and integrity and to promote open access to information as a way to achieve transparency ,accountability and good governance.

He said the implementation of the Right to Access Information Commission is undertaken by close partnerships with stakeholders and underpinned by cooperation, collaboration, equity, open, transparent and specific actions and activities.

By I K Musa