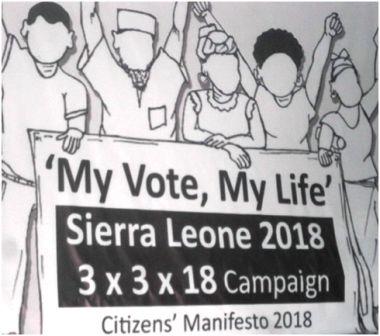 This is time for every Sierra Leoneans to benefit from the huge natural resources, privileges, democracy and good governance among others, if our politicians are actually willing to work with the aim of implementing the 2018 elections Citizens Manifesto that was launched last Saturday at the Miata Conference Centre in Freetown.

Dr. Memunatu Pratt, in her statement described the ceremony as important for the country as a whole because, she said it is a platform for our leaders including Presidents, Ministers, Mayors, Members of Parliament, Councilors, and heads of Government institutions among others to know exactly what citizens and even non Sierra Leoneans should benefit.

She deliberated on the importance of our politicians to concentrate on fulfilling our desires than to always speak on things that will solely suit their comfort. We will not allow politicians to tell us what they should do for us and the children yet unborn; but we are going to urge them to provide or utilize well the basic natural resources the country is endowed with. She encouraged politicians to guarantee our right to right to education, food, shelter, democracy and good Governance.

Dr. Pratt spoke on the importance of all Sierra Leoneans to maintain peace during election processes because according to her, Sierra Leone has no good record in terms of conducting free, fair and transparent election.  Madam Pratt emphasized that politicians must connect with the electorates because according to her, election is one day but governance remains for long period. She noted that it is right for our leaders to rule us well through providing basic necessities especially education, good health care delivery and guarantee our human rights. “Citizens should be the driver and politicians remain the driver” said Madam Pratt adding that single vote should increase life expectancy of every electorate. She lamented that Sierra Leoneans life expectancy should rise up from 35 to 70 years and they must benefit from the huge natural resources the country endows. She mentioned the important for our politicians to provide us with quality education that will not only benefit the whole nation but they will also provide us with quality education that would compete in the world market. She stressed on the essence for our leaders to increase women participation in governance to 40% because according to her, women serve as bread winners for most families in both provinces and even in the Freetown municipality.

She said research has revealed that, much is not yet done to implement CRC recommendation and she emphasized that we as a nation should change our political philosophies and described members of the Civil Societies and religious leaders as collective voices for the people.

Pratt stated that the 2018 election manifesto will be a bench mark to monitor the governance system after elections adding that nationalism, patriotism and collective action must be put in place if we are to achieve development. She spoke on the rigorous trials we have gone through from war to peace as a nation. She maintained that leaders should not only declare their assets publicly but should also answer necessary questions, be transparent and accountable to the people they are governing. She invoked the participation of all to spread the good messages in the citizen’s manifesto for the fact that, it is everybody’s business.

Abu Brima from NMJD who spoke on the national resolution said citizens highlighted such critical manifesto because they wanted the country to develop and urged our leadership to work within the content of the just premiered manifesto to deliver the people’s desire.

He said prior to the launching of this report, which he described as meaningful engagement because it comprised all sectors in society, a nationwide consultation was first conducted to capture the exact views and wishes of the people adding that citizens are mostly concerned about their welfare and not lip service.

He called on our leaders to increase young people’s involvement in governance to 15%, 5% Persons with disability,  40% women participation because he said those days have gone when certain class of people are exempted from been part of governance. “Asset should not only be published under the Anti-Corruption Commission but should also be done publicly before election. According to the NMJD Boss, we don’t deserve the kind of poor country we are living because we have all what it takes to make us prosper and be peaceful to live together as a nation. He appealed that 25% revenue collected to be put aside for the development of our educational system which he said has been dumped at the dustbin.

He further appealed for the Free Health Care (FHC) not to be limited on pregnant women, lactating mother, under-fives children but should be extended to the persons with disability because it is not inability. He described the citizen’s manifesto as comprehensive because it takes care of priority things which our past and present leaders have neglected.