The Sierra Leone international, Kamara, 29, who was deployed in a defensive role expressed his delight after his 18th minute opener for the club.

“I was over the moon to score a very good goal and was my first since joining the club. Obviously, it has been a long time coming and I hope to continue scoring,” said Kamara.

I’m really pleased, especially to score the first goal in a difficult game away from home.

However, the (6 ft 1 in) former FC Riga player was disappointed as they failed to hold on to the win after the host equalised 18 minutes to full time.

“It is a shame because we played so well and was close to winning on Saturday, we were unable to score another goal  We were playing better until they scored, is really disappointing,” Kamara told footballsierraleone.net.

Kamara has been in magnificent form for Kaisar since joining the club in January on a one-year deal to keep him at the club until the end of 2017.

FC Kaisar next outing is another away contest taking on FK Okzhetpes Kokshetau on Friday, July 28.

They are presently sixth in the Kazakhstan premier standing. 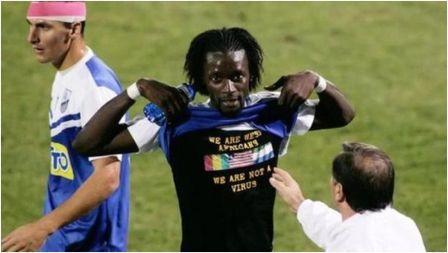