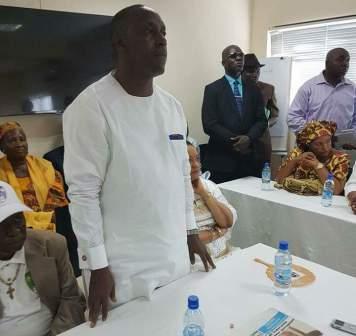 Factional fighting and dirty party politics have shattered the SLPP that now finds itself shivering on thin mosquito legs with no hope of recovering even after the conduct of the presidential elections scheduled for next year.

The once reputable political party that brought independence to the country has now been deserted by most of its level headed supporters allowing the party to be hijacked by riffraff known as “paopas”.

The resignation of Dr. Kandeh Yumkella from the SLPP does not call for celebration even by the Paopa faction! It spells out a further fragmentation of the SLPP as all the votes to be obtained by KKY will be green votes!

The disintegration of the SLPP that has been fighting itself from within means a self defeat even before the whistle is blasted for the race to State House!


The centre of the SLPP can no longer hold!  Things fall apart!

Crippled and riddled by factional fighting, the SLPP has created the conditions for the APC to win the next elections hands down!

Dr. Yunkella’s letter of resignation speaks volumes about the degree of intolerance and mudslinging that have reduced the SLPP to a group of hooligans and bandits who are ready to physically assault anyone that is not in favour of the paopa faction of the party.