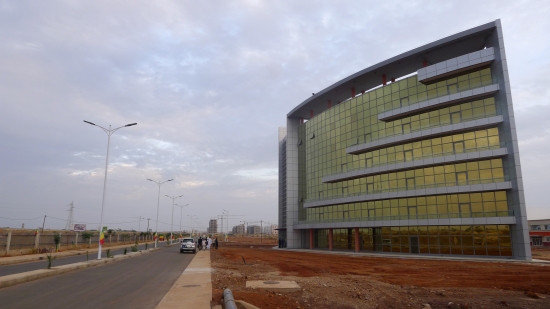 The 2017 Economic Report on Africa calls for harnessing urban growth

There has been much talk about Africa’s urban dividends—the increased prosperity and sustained socioeconomic development resulting from the expansion and industrialization of African cities.  (Photo: Admin buildijng at new Diamniadio industrial park Dakar: photo Reuters/Nellie Peyton)

Yet such dividends can be derived only from governments’ deliberate planning and management of cities. That is the essential wisdom shared in the 2017 Economic Report on Africa (ERA), written by experts at the United Nations Economic Commission for Africa (ECA).

Two years ago the ECA called on governments to use smart trade policies to advance industrial goals. Last year the report argued for “green industrialization,” urging countries to infuse green initiatives into value-chain activities, especially during the process of transforming raw materials into finished products.

The 2017 report, launched in Dakar, Senegal, in March 2017, was one of the high-level events marking “Africa Development Week.” The purpose of the report is to “assist governments and policy makers with strategies to harness urban growth and advance Africa’s industrialization,” says Adam Elhiraika, the director of the Macroeconomic Policy Division at the ECA.

Experts calling for increased attention to management and planning of cities often refer to a UN report that highlights the fact that 4 out of 10 people in Africa currently live in cities. With an annual urban growth rate of 3.4%, that number will rise to 5 out 10 in about 18 years, meaning that by 2035 half of the continent’s population will live in cities.

Such urban growth can be explained by rural dwellers’ migration to the cities in search of better economic opportunities and access to essential services.

But these population movements from rural to urban areas are rarely properly managed, and cities are often unable to provide residents with such public amenities as housing, water, electricity, health, education, sanitation and jobs, to name a few.

Traditionally, urban growth in developing countries is seen more as a challenge than an opportunity, Pierre Goudiaby Atepa, a prominent Senegalese architect, told Africa Renewal. “It doesn’t have to be like this forever,” he said.

Some governments have responded to urban population pressures by building new cities, such as Diamniadio in Senegal, or rehabilitating older cities, such as Kigali in Rwanda.

The 2017 ERA does not, however, advocate the creation of new urban centres to solve the problems associated with urbanization. Instead the report points out the need for governments to plan “urban and industrial development through deliberate policies and investments as a priority for the sustainability of both cities and industries.”

In other words, according to the report, urbanization and industrialization should go together. “History and experience demonstrate that urbanization is closely linked to economic growth and the transformation of economies towards productive sectors, namely industries and services.”

The idea that African cities and towns could be engines of economic growth and social development is not entirely new. Five years ago the African Development Bank pointed out that 55% of the continent’s GDP comes from cities. In South Africa more than three-quarters of GDP comes from “metropolitan and other large urban municipalities,” according to Lungisa Fuzile, South Africa’s former director-general of the treasury.

In 2015 the Mo Ibrahim Foundation referred to selected non-African countries to argue that there is a correlation between urban growth and increase in GDP per capita. The foundation’s report, African Urban Dynamics 2015: Facts and Figures, demonstrates “a consistent link between a country’s level of urbanization and its GDP per capita,” although such a link remains relatively and historically low in African countries, with the exceptions of Morocco, South Africa and a few other cities.

That African cities are not contributing enough to GDP may be explained in historical and geographical contexts. Africa’s major cities, for example, were located by the European colonial powers along the coast for the easy removal of raw materials by sea, or inland near the sources of those materials.

The colonial legacy continues to overshadow Africa’s current economic reality, which has remained tied in large part to the extractive industries. For years the ECA and a variety of experts have urged African countries to use value addition to raw materials sourced locally as a vehicle for industrialization.

The Asian experience demonstrates that structurally and historically, urbanisation is a by-product of agricultural or industrial productivity growth. However, the problem with Africa is that countries with low productivity growth also appear to be witnessing urban growth, but without structural transformation.

“In some African countries, urbanization has been driven by the effect of natural resource endowments rather than industrialization,” the Mo Ibrahim Foundation underscored in its 2015 report.

This year’s ECA report corroborates the Mo Ibrahim Foundation’s argument. “Africa’s unguided urban expansion risks perpetuating non-inclusive and unsustainable development growth,” warn the authors of the report. For that reason governments are advised “to make hard choices for the scale and type of investments they need to make, and for the spatial pattern (where the cities are located and how they interact) and urban form they want to see.”

The ERA acknowledges those countries making efforts to tackle urbanization fallout, such as by building new cities, but it sees room for improvement.

Population growth, according to Mr. Elhiraika, could lead to a rise in the middle class population, which in turn would trigger new consumption patterns, leading to an increase in demand for processed goods, a development that itself presents an opportunity for industrialization.

What Africans must do, he concluded, is add value locally to valuable mineral and agricultural resources.