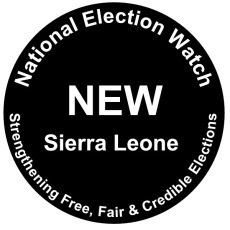 The National Election Watch (NEW) has expressed fear that the Government of Sierra Leone is not well prepared for the coming general elections slated for March 7, 2018.

Speaking over AYV television during the National Dialogue program, a senior official of NEW, Masella Sesay, observed that NEW has detected visible signs that government is not ready for the 2018 elections, one visible sign being the failure of government to honor its promise of using the biometric multi-purpose voter cards but, instead, resorted to the use of low cost voter cards.

Madam Masella noted that it would have cost government about 30 million US Dollars to use the biometric multi-purpose voter cards for the 2018 elections as it promised, opining that financial constraints might have compelled government to abandon the idea of biometric voter cards and revert to the idea of using low cost cards, a situation which, she said, has caused them to begin doubting the financial preparedness of government to run the 2018 polls.

Sesay continued that even the constituency boundary delimitation is fraught with irregularities, a cause for the justifiable fear of NEW.

Responding to the fears of NEW over the possibility of 2018, the National Head of the National Electoral Commission (NEC), Nfa Alie Conteh, stated that NEC is ready to go ahead with the elections despite the numerous challenges the commission is facing.

Conteh expressed confidence that even the people of Sierra Leone are ready for 2018 polls as evident in the fact that three million citizens have registered to vote.