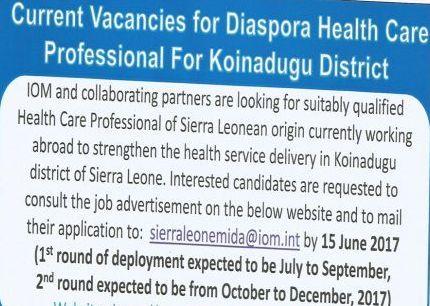 Over the years, there has been a mass exodus of health workers from Sierra Leone mainly due to deplorable working conditions. Thousands of them have left their homeland to seek greener pastures abroad.

A survey conducted by the International Organization for Migration (IOM) in 2014 revealed that about four thousand health workers had so far left Sierra Leone for various countries overseas.

The situation has been a possible cause for the acute shortage of health workers now plaguing the country. For example, the largest district in Sierra Leone, Koinadugu, has only two medical doctors.

It is against this background that the IOM and the Office of Diaspora Affairs (ODA Sierra Leon) are collaborating with the Ministry of Health and Sanitation (MOHS) to implement a year- long Japan Government- funded project titled, “Strengthening Sierra Leonean National Health Care Capacity through Diaspora Engagement.”

According to the Project Manager, Japanese born Kunikazu Akao, the pilot project is targeting Koinadugu District which is in dire need of more doctors, nurses and midwives.

He pointed out that they decided to first target Koinadugu because it is one of the most vulnerable districts in the country though it is the largest.

Mr. Akao explained further that the whole project was born of the consideration that Sierra Leone had lost thousands of health workers to migration and, recently, to the Ebola outbreak which claimed the lives of over 250 health workers including eleven medical doctors.

The Project Manager informed that the project has provision for transport fares, accommodation and allowances for Sierra Leonean health workers abroad who will be willing to come back home and serve especially Koinadugu District.

He continued that although IOM expects the initial duration of the assignment to be three months, it can be flexible based on the applicant’s situation.

Akao concluded that the overall objective of the project is to revamp Sierra Leone’s health sector and, hence, called on Sierra Leonean health workers to come back home and work for their country.