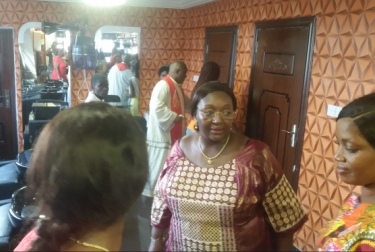 Links 2 an entertainment centre, a hair dressing saloon and a massage parlor was on Sunday 30th April 2017 officially opened by the First Lady Madam Sia Koroma. The Enterprise which is owned by the wife of the former Attorney General Mr. Frank Kargbo is housed in a 3-story building opposite Babadorie junction along Spur Road in western Freetown.

The opening ceremony commenced with prayers of dedication by Rev, Father Ambrose Michael of Our Lady Star of the Sea.  Shortly after the prayers were done the cutting of the tape at the entrance of the down floor was done by the First Lady Madam Sia Koroma. Guests were then taken on a conducted tour by the proprietress Mrs. Irene Kargbo.

Speaking at the ceremony Madam Koroma praised the resilience of Mrs. Kargbo in the promotion of female empowerment. She gave a brief history of the mishap that befell the Kargbo family as the saloon located in the city was gutted down by fire; noting that it did not dampen her determination to forge forward. Today Madam Irene could boast of 2 enterprises (Links 1&2). This is an indication of how development oriented the proprietress is, the first Lady added. She has been able to empower youths (gender empowerment) and up grade4 the skills of her staff. Words of praise were also showered on the former AG for his commitment to gender empowerment as displayed by his support to his wife to make this dream a reality.

At the entrance of the second floor the second Lady Mrs. Junta Foh did the cutting of the tape. On the first floor the restaurant is located, on the second is the hair dressing section and on the top floor is the massage parlor.

After the conducted tour, both first and second Ladies became the first customers of the newly opened edifice; with the former having her hair done whilst the latter had her nails done. Light refreshments climaxed the ceremony.

VP Foh Mourns With The People Of W...