VP Foh Mourns With The People Of Wara Wara Bafodia 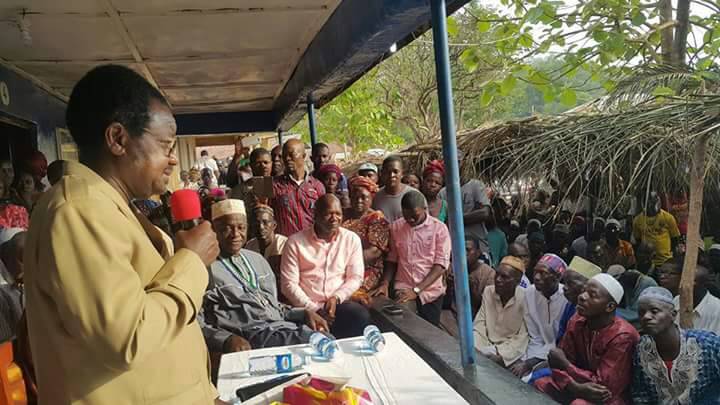 VP Foh Mourns With The People Of Wara Wara Bafodia

Hon. Vice President, Ambassador Dr. Victor Bockarie Foh  Wednesday 3rd May, 2017 visited the Wara Wara Bafodia Chiefdom, Koinadugu District to sympathise with the family and people of Bafodia on the death of their Paramount Chief, Alhaji Alimamy Hamidu, who died on Monday 1st May, 2017.

Addressing family members, Paramount Chiefs and the people of Bafodia at a ceremony held at the late Chief’s compound, VP. Foh informed that he is here with the blessings of His Excellency the President, Dr. Ernest Bai Koroma to sympathise with the family and offer support to them at this very difficult moment. He stated that the testimonies he had heard about the good works of the late PC Alimamy Hamidu I. makes him sad. He prayed that these testimonies will serve as prayers for the soul of the late Paramount Chief to rest in perfect peace. Vice President Foh went on to pay glowing tribute to the hard work of the late Paramount Chief in bringing infrastructural development and education to the Bafodia Chiefdom and it people. He noted that replacing him will be difficult, but prayed that God will give them a successor with the same developmental vision as the late man. He called on the people of Koinadugu to be sober minded and be united, as there’s strength in unity.

The Hon. VP informed the family that he is part and parcel of them and assured them that with prayers he will never abandon them.

The ceremony was climaxed by the pouring of libation at the grave site of the late PC. Alhaji Alimamy Hamidu I. by the Hon. Vice President accompanied by Paramount Chiefs.

The ceremony was chaired by the Deputy Minister of Political and Public Affairs, Hon. Akmed Femi Mansaray.