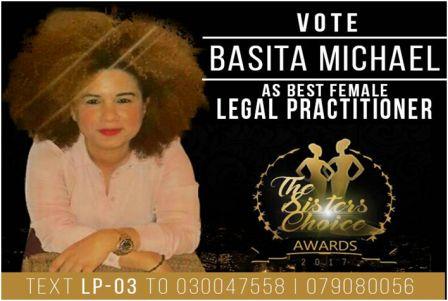 Basita Michael (in photo), an erudite legal practitioner, was on Friday 28th April 2017 awarded the best female legal practitioner of the year by the Sister’s Choice at a colorful awards ceremony at the Golden Tulip Kimbima Hotel, Aberdeen in Freetown.

Sister’s Choice is a locally based group of responsible women headed by KumbaDogba, which sole aim is to organize a yearly award to recognize and acknowledge the individual roles women are playing in society and how their work has impacted society.

Receiving the award, Mrs. Basita Michael thanked Sister’s Choice for the recognition adding that it is good for Sierra Leone and as a Country, to know that we are now developing a structural culture of appreciating women in an objective manner based on merits.

“I have not won any award before,its my first. I never knew people took notice of my work let alone win an award. It has never crossed my mind. I just do my work to the best of my ability,” Mrs. Michael stated.

When asked how she feels about winning such an award, her swift response was: “Of course am happy I got it, it’s a big boost.  However it simply means more work, and striving for bigger accomplishments not just for one self but also for my beloved Sierra Leone which has endlessly given me everything I had ever wanted.

“I must also admit that I owe it all to my husband for his guidance and for putting up with all the terrible attitude and temperament caused by my compulsive obsession with work which sadly I can’t help but bring home. Moreover had he not encouraged me to accept the nomination I will not have won this glorious award.”

Mrs. Michael happened to be the owner and founder of SierraEye Magazine, a Magazine that has huge following for its Political, Socio-economic, Educational, Cultural and Social stories and comes out on a quarterly bases.

Mrs. Michael is not only the owner and founder of the SierraEyeMagazine, she is a writer for the Magazine with exceptional writing skills. She is widely admired and followed for her fantastic Political, Socio-economic, Educational, Cultural and Social Commentaries on her Magazine since its inception in 2006.

Mrs. Michael is also a distinct lecturer at the University of Sierra Leone (FBC) Law Department. In the past she lectured law of Contract. Currently she lectures International Criminal Law. She is widely acclaimed as a lecturer that treats her job seriously and creates a serene and good student-lecturer relationship. Recently she was appointed as Chairman of Student’s Complaint Committee, FBC, Law department.

Mrs. Michael herself is a graduate of FBC, University Of Sierra Leone, and Holds a degree of Utter Barrister and Solicitor, Sierra Leone Law School. She is also a holder of Masters of Laws Degree, in the Specialization International Criminal Justice, Queen Mary, University of London.

The outspoken legal luminary shared the award with her clerk Ibrahim Sesay whom she refereed to as ‘the brother I never had’, those that supported her and all the hard working Women in the country.

She said: “Iwant to also dedicate this to my late mother-in-law who stood by me by taking care of my kids when I was busy following my ambitions. I also thank my mum, dad and Stevelyn my eldest Sister for sacrificing every single penny to pay my fees at FBC. A special thank you to my baby sister Manal for campaigning for me and to my kids who never doubted once that I would win it. To those that took the time out to vote for me I thank them all from the bottom of my heart.” This year’s is the maiden award hosted by the Sister’s Choice and shows a huge prospect of staging it annually. A good number of women across the country were nominated for various categories of awards which saw women of great repute in society from all works of life ranging from Politics, Business, Private Sector, Academia amongst others were nominated.

The event which was organized by “Life is Beautiful” a company known for customized weddings and events, event management amongst others were the sole sponsor of the event.

My Personal Tribute On The Late Am...