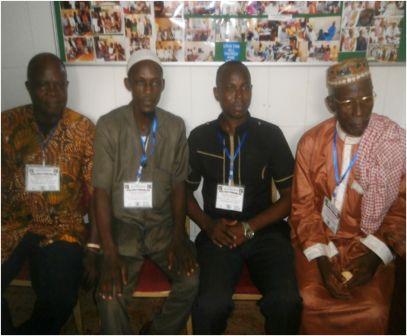 In his opening statement, the NCPS-SL President, Alhaji M.A Koroma said, the organization was established to help improve the lives of vulnerable pilgrims after pilgrimage and Imams so that they could maintain their dignity and live better in society. He extended thankfulness to the various regional representatives from across the country for leaving all busy schedules to witness every single proceeding about this so important Islamic forum.

He disclosed that, their mandate is to seek the welfare, respect, and trust, dignity of all vulnerable Pilgrims, Imams and the entire Muslims in Sierra Leone and cautions Muslims to be ready to put priority on the development of Islam in the country.

Alhaji Koroma further encouraged other Islamic organizations to put more attention in improving the welfare of its scholars, noting that, the aim of the organization is  to ensure vulnerable pilgrims become self reliant in society. “We invited all regional district representatives to be part of the exercise because we believed that Freetown is not Sierra Leone”, The President concluded.

Secretary General, NCP-SL, Sheikh Mohamed M. Dumbuya informed that, the organization is encouraging all Muslims across the country to register and gain membership and described the organization as new but committed to its task charged with the mandate to improve or transform lives of Muslims at risk in the country through the help of Government and other philanthropist citizens. The Empowerment Officer, NCP-SL, Mr. Alieu B. Sesay who also doubles as Training Manager, Imam Khomeini Relief Foundation Computer Studies, Sierra Leone Branch emphasized the need to empower Imams and pilgrims to exhibit their duties spiritually, morally and effectively and asserted that those set of religious leaders should be trained on certain vocational skills such as computer education and other basic trainings assuring that he  will use his expertise on computer to transform the lives of designated people.

The National Public Relations Officer, United Council of Imams, Sheikh Ibrahim Kolleya Kamara expressed appreciation over the initiative of NCP-SL to form what he described as crucial Islamic organization and admonished the general membership to always maintain unity for the progress of the organization.

He assured that his organization is always willing to find solutions on issues affecting Muslims especially on developing community mosques. He expressed gratitude to all those who left their busy schedule to make sure the program was successful. Representing Milton Margai College of Education and Technology (MMCET), Goodrich Campus in Freetown, Fatmata Isatu Falama delivered vote of thanks.

We Must Be Ready. But How?