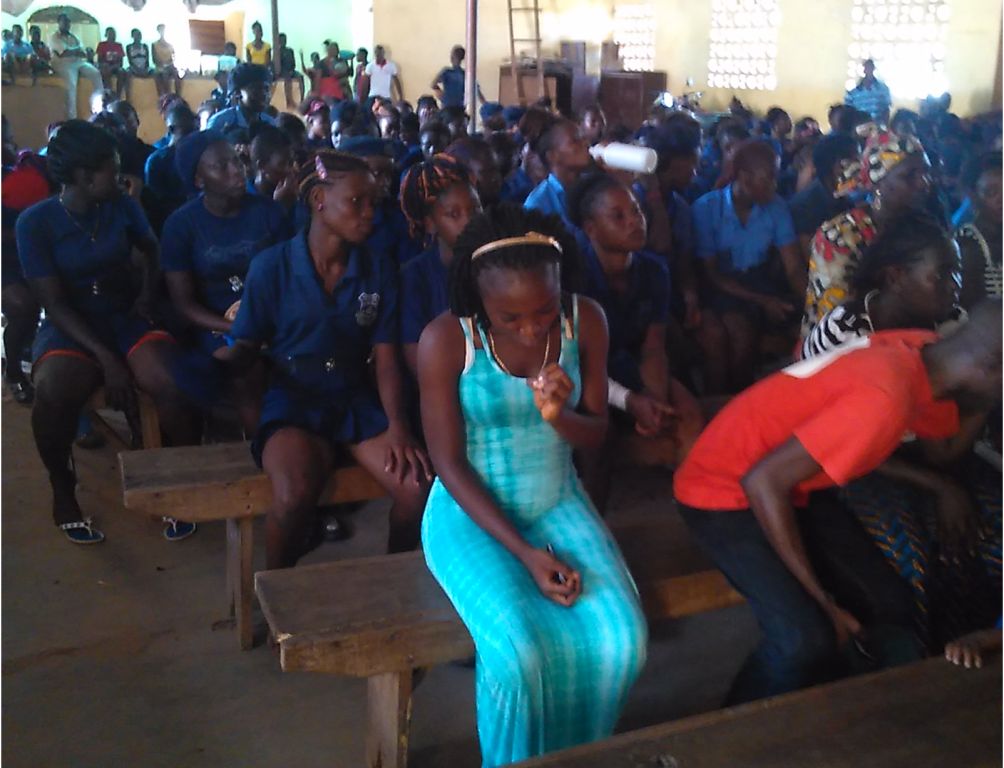 Maude Peacock Urges Girls To Focus On Their Studies

The President of the Women’s Forum Sierra Leone (WR-SL), Mrs. Maude Regina Peacock, on Tuesday 11th April 2017 admonished pupils of the Prosperity Girls High School in Rotifunk, Bumpeh Chiefdom, Moyamba District to be focused on their education stressing that the first speech day and prize giving ceremony of the school is a historic day as some of them would be recognized and awarded with prizes while teachers would be appreciated for their hard work assuring the girls that she is one of them.  (Photo: Some pupils of Prosperity Girls High School in Rotifunk)

The guest speaker said she has spent a lot of time mentoring girls informing that as President of the WF-SL, they empower girls, that her theme is centered on the school’s motto-progress that leads to prosperity, dilated on how to achieve progress, key ways to achieve progress which she emphasized are through education.

Mrs. Peacock described education as a long process in which people become knowledgably and acquire information underscoring that education empowers and talked on the different types of education like formal in school, non-formal–vocational, informal at home, community and religious places underlining that education is for one to become independent, contribute to self, family, community and country.

She further urged the girls to behave themselves and respect elders, be regular and punctual in school, be attentive, focus on their education and not other things maintaining that at night they should study hard, avoid sex, wait for the right time, respect their teachers, do their homework on time and above all believe in God observing that many girls have become pregnant in the community and dropped out of school, called on parents to help the teachers to encourage their children to be studious reminding teachers that discipline starts with them before they can discipline the pupils.

She further informed the pupils that she attended the United Methodist Church Primary School in Rotifunk before proceeding to the Saint Joseph’s Convent Primary and Secondary Schools in Freetown after which she studied at Fourah Bay College and also the University of Reading in the United Kingdom.

She revealed that she has worked all over Sierra Leone and now is Principal Lecturer at the Milton Margai College of Education and Technology polytechnic Goderich in Freetown where she has on several occasions acted as Vice Principal articulating that she is impressed with the school for which she acclaimed God for the proprietor, Mr. Alton Bendu for partnering with his friends in Norway to support the school.

Other dignitaries who made statements at the ceremony included a member of the Board of Governors of the school, a representative of the Norwegian delegation and the proprietor, Mr. Alton Bendu who said the girls are the heroines and commended staff for working hard to make the school one of the best in the country and a role model.

He also promised that next year prizes would be awarded to pupils for exemplary performance in the various subjects.

Highlights of the ceremony were the presentation of prizes and certificates to the pupils and teachers by Mrs. Maude Peacock while the vote of thanks was rendered by Mariama Massaquoi, a Junior Secondary School pupil.

Prosperity Girls High School, with the motto, ‘Progress for the Girl Child’, was founded by Alton Bendu on 21st September 2009.