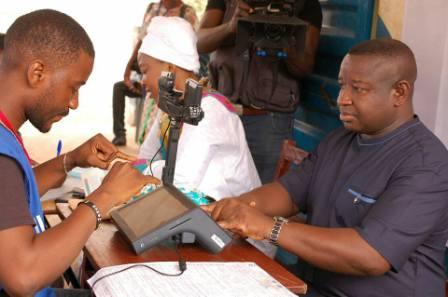 A good leader is a person who leads by setting a good example for others to emulate. So after launching audio messages and mobilising stakeholders and supporters in the intense voter registration sensitization campaign, Rtd Brigadier Bio and his wife, Mrs Fatima Bio, (in photo) 21st March 2017 registered at Ward 423, Constituency 132, Centre Code 14253, Services Secondary School, Juba Barracks in Freetown.
On arrival at the registration centre with smiles and reassuring personality, Bio and his wife attempted to join the queue as the procedure demanded when spontaneously people in the queue shouted “We will not allow our next President to stand in the queue”. With their usual humility, Bio and his wife accepted the honour and complied with the requirements of the registration process.
After completing the registration process, a throng of young people mainly first time voters rushed to the the scene of the registration to catch a glimpse of a man they referred to as the “next President”. But Bio could not miss the opportunity to continue his voter registration sensitization message especially to the young people who seemed energized.
In addressing the crowd and journalists, Bio appealed to them that everyone should take the registration process with utmost seriousness, adding that the registration process is a lifetime opportunity every citizen should embrace. “It is our right and responsibility to register, vote and be voted for. Therefore, nobody should be left out,” Bio told the crowd.
With the many concerns that have been raised by citizens relating to delays and machine malfunctioning, Bio also admonished the gathering to be patient with the process as he pointed out that indeed the process is slow due to the many questions on the questionnaire.
As a listening politician, Bio also stated that he is aware of the concerns raised by many citizens about the slow nature of the process. From many of those concerns, Bio stated that many centres across the nation did not meet the threshold set by the National Electoral Commission because many machines malfunctioned on the first day of the registration exercise.
However, Bio told the people that they should take that as a challenge and come out more to register so that their votes can make Sierra Leone a better place.
In her short statement, the beautiful and adoring wife, Fatima Bio, expressed her happiness for participating in the registration process, adding that she was particularly happy because she will not only be voting for her husband but more importantly for the future of Sierra Leone.
Fatima also used her short statement to thank all the women who were in the queue to register. She admonished all women who are qualified to participate in the registration exercise because they will be voting for the destiny of our beloved country. As the crowd was dominated by young people, Fatima also encouraged the young girls who are either 18 or will be turning 18 by March 7th 2018 to participate in the process so that they can be part of the change they desire. She reiterated that the right to vote is not just an opportunity but also a right that all must enjoy regardless of background, political affiliation and tribes.
Many students who also came to catch a glimpse of Bio climaxed the encounter by chanting slogans like “Maada Bio say, No SS 4” and “Maada Bio say, More for Girl Child”.
By: Julius Maada Bio Media and Communications Team
Stay with Sierra Express Media, for your trusted place in news!