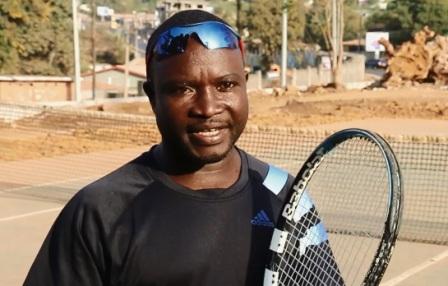 A new direction for tennis in Sierra Leone

He started as a ball boy at age 5, retrieving and supplying balls for players and officials at the Hill Station Tennis Courts, whether during training sessions or at local tournaments. Ball boys and girls are key auxiliaries in sports such as football, cricket, tennis, baseball, and basketball as their activities help to speed up play by reducing the amount of inactive time. Being involved in the game at such a tender age, he had only one motivation: to play tennis at the highest level and represent Sierra Leone at international tournaments thus following in the tracks of great Sierra Leonean tennis prodigies like Kelfala Samura, Joseph Amara, Vincent Syvalie, and Edward Kamara, whom he watched growing up.

It didn’t take long for young Amidu Dumbuya’s  talent to be spotted. The promising tennis kid he was, it took Amidu just 5 years to break into the national junior tennis ranks as at age 10, he started representing Sierra Leone at international junior tennis tournaments. He went on to represent the country at all levels, and was a key figure for the Men’s at various international tourneys.

He participated in major tennis tournaments including the All Africa Games in Abuja and the Islamic Games in Saudi Arabia, among others.

Amidu brought his illustrious playing career to a halt in 2003 and went straight into coaching to help prepare the future generation of Sierra Leonean tennis stars. He earned his first professional coaching certificate in 2003 – Level One. He did his Level Two coaching course in Valencia, Spain and was appointed head coach of the Sierra Leone Tennis Association (SLTA) in 2010. However, he was immediately confronted with the problem of limited training facilities and inadequate funding to support a program for the development of young professionals.

Amidst a plethora of constraints, the Sierra Leone Tennis Association has been struggling with developing its tennis courts at Hill Station in the west-end of Freetown for the past 6 years due to lack of funding and support from the country’s Sports Ministry. But that didn’t diminish the desire in Amidu to help young and passionate lovers of the game achieve their dream. And his resilience paid off after meeting a woman who herself spends extra hours after work hitting a tennis ball with a racquet.

“It was difficult for us to have equipment like tennis balls: head balls and foam balls. The equipment we received from the ITF were not enough for the country,” said Amidu.

It all started 7 years ago when Amidu met Cari Votava, Senior Financial Sector Specialist at the World Bank working on Sierra Leone. They both forged a friendship that would later lead to the rekindling of the hopes of young Sierra Leonean boys and girls who see tennis as their future. Work has finally begun at the Hill Station courts and will involve the construction of four outdoor tennis courts and an indoor court.

Since tennis has over the years not received the support it requires from the ministry responsible for sports, unlike football, Cari – a former gymnast for 20 years who also played tennis from the age of 33 – has been providing Amidu with tennis equipment and financial support to help in the training of the kids to enable them to upgrade tennis skills and try to fulfill their dream of becoming stars and competing at professional level.

“Seven years ago when I started working in Sierra Leone, I saw there was a tennis court and was looking for somebody to play, and the hotel [Country Lodge] told me to call Amidu. And we started playing. He started telling me that he trains young children and I was very interested in that,” said Cari, 50, who has been supporting Amidu and the kids keen to learn tennis. “I bring tennis racquets, I bring strings, I try to bring a little bit of equipment here and there on my trips. And I help him train the kids, some of whom are now grown-up and very high level champions.” Cari Votava, the Assistant Tennis Coach, and the tennis kids.

The tennis project at Hill Station finally got underway in January after the International Tennis Federation (ITF) granted money to renovate the courts. Amidu was able to attract the attention of the ITF to fund the construction some 6 years ago but did not immediately receive the necessary approvals from the government. Their efforts were further hampered by the Ebola outbreak. The US$20,000 project is being facilitated by the SLTA with Amidu, the head national coach, one of the lead facilitators. Though the project is underway five years late, Cari is happy that things are now moving forward and will result in five new courts so that all the coaches could involve in developing junior tennis training programs to enable the kids compete at higher levels.

Cari has been bringing used tennis racquets collected from her Washington D.C. tennis pals for years. She also brought strings, grips and other necessary accessories donated by Tennis Warehouse, a tennis equipment supply company in California. Few years back, she collected US$3,000 in donations from her tennis friends to cover the costs to fly the head coach and a couple of the top junior players to the ITF’s West African Regional Junior Tournament (usually held in January). This was before the Ebola outbreak in 2014; and it was the last time the Juniors participated in an ITF tournament.

The SLTA is no stranger to funding difficulties to support their teams to travel to even neighboring countries to compete against other experienced players. But for soldiering through these difficulties, Cari thinks Amidu is the real hero of Sierra Leonean tennis as “he sacrifices a lot to train the kids”.

“He was the one that got the ITF to agree to fund renovating the Hill Station courts, and waited patiently for some time for the Sierra Leone government to give approval,” said Cari. “I was angry and frustrated for him all these years – but he just maintained a big smile and positive attitude.”

Amidu and the tennis kids are used to disappointments since the Ministry of Sports provides almost no support to tennis programs in the country. Cari believes she is just a supporter of Amidu by helping to train the kids and bringing strings, equipment and donating money to cover school fees of the kids.

Amidu’s wish is for at least two of the courts to be ready before the rainy season sets in, so that the game will not be interrupted as the construction work continues.

The construction of the new courts will no doubt accelerate the development of the game of tennis in Sierra Leone and help groom tomorrow’s champions. This is an example of how the little things – as exemplified by Cari – can make a big difference in Salone.

Obituary for Alieu Kamara, aka Big...