ACC Enlists Peninsular Police in the Pay No Bribe campaign 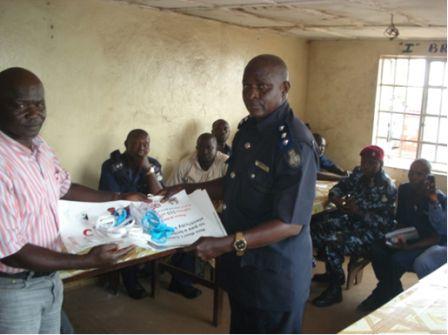 ACC Enlists Peninsular Police in the Pay No Bribe campaign

The Anti-Corruption Commission (ACC) has enlisted the support of members of the Sierra Leone Police (SLP) at Tombo Peninsular on the Pay No Bribe (PNB) campaign. One of the mandates of the ACC is to enlist the support of Sierra Leoneans to join the fight against corruption. The SLP, being one of the national pillars of integrity makes useful partnership in this direction.

On Tuesday 7th March 2017, ACC took the PNB campaign to the Tombo Police Station at the Western Area Rural District. The objective of PNB campaigns is to enhance effective service delivery in the public service, thereby promoting a corrupt free society which lays the foundation for national economic development.

Speaking at the engagement, Senior Public Education Officer at the ACC, Al-Hassan Sesay drew the attention of the Officers to the fact that bribery is common place in many sectors in Sierra Leone, including the SLP, as evidenced in many national and international surveys.  Mr. Sesay explained that the PNB is one of the new initiatives designed to reduce, if not eradicate the prevalence of bribery in public institutions. ‘The PNB’, Mr. Sesay said ‘is an anonymous reporting platform that aims at gauging the trends of bribery in various MDAs in Sierra Leone, using five sectors as a case study for the six months pilot phase’. The five sectors include: Health, Water, Electricity, Education and the Police. The Senior Public Education Officer revealed that these sectors were selected as pilot not because they are the most corrupt but because they are all key service delivery agencies of Government, hence prone to opportunities of bribery. Taking the audience through the current state of the data base at the reporting portal, Call Centre Operator, Koma Nancy Yeawa Ngandi-Williams told the Officers that there are three categories in the reporting portal: I PAID A BRIBE, I DID NOT PAY A BRIBE AND I MET AN HONEST OFFICIAL. She noted that 10,000 reports have so far been received for I paid a bribe, 1,262 for I didn’t pay and 890 for I met an honest official. She further disaggregated the reports by sectors as follows:  SLP: 4,384, Education: 2,321, Health: 2,122, Electricity: 453, Water 139 and Others: 580. In the ‘Others’ category, the sectors which have more reports were: the Judiciary, Sierra Leone Road Safety Authority, National Registration Authority and Ports Authority.  Interestingly, the highest number of these reports was from young people between the age range of 15 – 19 years. Among these reports,  Koma unveiled that 34 were for Tombo Police Station and were all in the category I Paid  a Bribe. She mentioned the 515 toll free line, the app in English, Krio, Temne and Mende and the website www.pnb.gov.sl, which anybody can use to make a report

Responding to the campaign, the Officer in Command of the Tombo Police Station, Assistant Superintendent of the Police, Lansana  Sesay, thanked the ACC for taking the campaign to their Post. He maintained that the SLP has always worked very closely with the ACC and particularly emphasized that the Inspector General of Police Francis Munu is very passionate to support the Commission in the fight against graft in all sectors of the country. ASP Sesay assured the ACC that the SLP is a Force for Good and will always stand with the ACC in the campaign against bribery.