‘We want a woman as President of Sierra Leone’ 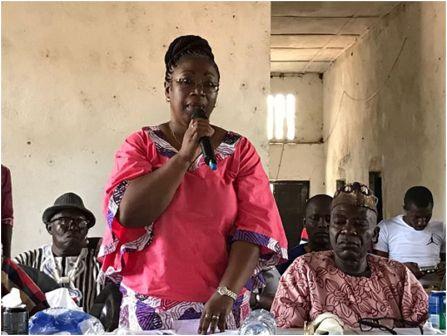 ‘We want a woman as President of Sierra Leone’

This is the reasoning of Kadie Jumu Peters, Chairperson of the Board of local Non-Governmental Organisation, SEND Sierra Leone, while giving the keynote address at a ceremony marking International Women’s Day 2017 at the Pendembu Community Center, Upper Bambara Chiefdom, Kailahun District, Eastern Sierra Leone.

The ceremony was organized by the community based organisation Kailahun Women in Governance Network (KWiGN) with funding from Christian Aid through SEND Sierra Leone.

“We should be clamouring for a female President by now,” said Kadie. “Women have done a lot for Sierra Leone, and even President Ernest Bai Koroma has appointed women in many leadership positions because he believes in their abilities and they have excelled in those offices.”

Kadie said women leaders have a lot of patience in doing things and they have empathy for people, although sometimes they have to be stronger to prove that they match up with the strength of men.

“Globally women leaders have proven to be less corrupt, if not corrupt at all, and diligent in their duties. Take the household for example; they know every sector in the home and are very good in allocating resources and they manage the home well,” she said.

The former Director of Advocacy at Save the Children Sierra Leone and former Policy and Program Manager at Christian Aid Sierra Leone, challenged women to make the forthcoming 2018 elections to be an election for women, and promised that she would try in her own small way to lift women candidates up.

“We have to challenge ourselves as women, by asking ourselves: what have we done for our homes, our communities, our districts and our country? Women should support their fellow women for political office. This is the only sure way we can have women in the right places to influence policies that will ensure equal opportunities and equal access to the resources of the State for women and girls,” said Kadie.

Kadie Jumu Peters was standing on solid ground when she made her bold call for a woman presidency in Sierra Leone. Kailahun District has the highest female representation in politics in the country. In the 2007 national elections Kailahun District elected seven women as Councillors; in 2012 the number rose to 12 and two Members of Parliament. In 2018 the women of Kailahun are aspiring to make it rhyme with 18 Councilors and eight MPs. And they already have a numeric slogan for this: ‘18-8-2018’.

But it seems Kadie has just challenged them to raise the bar higher.

Yet only one distinguished woman in the country has set her eyes on the presidency by declaring her intention to be the flag-bearer of her party, the All People’s Congress Party. Her name is Zainab Hawa Bangura.

All Hail Joseph Kamara After Juma...