FGM is a violation of human rights… Brima Sheriff 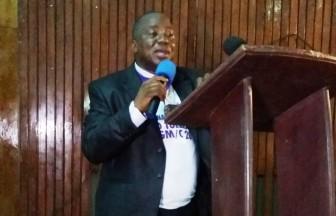 FGM is a violation of human rights… Brima Sheriff

Commissioner Brima A. Sheriff of the Human Rights Commission of Sierra Leone (in photo), has said FGM is a violation of the human rights of women and girls and that it cannot be separated from the deep-seated and pervasive discrimination against women.

The Human Rights Commissioner was speaking at the Miatta Conference Center Monday February 6 during a conference organized by Forum against Harmful Practices during the International Day of Zero Tolerance of FGM with the theme ‘Awake to the realities of FGM, Act Now on the National Strategy for the reduction of FGM in Sierra Leone’.

Commissioner Sheriff however reiterated the position of the Human Rights Commission of Sierra Leone on FGM which he said has been reflected in almost all their State of Human Rights report. “We have a Zero tolerance to FGM and campaign for its eradication. This position reaffirms that FGM is a violation of the human rights of women and girls- it cannot be separated from deep-seated and pervasive discrimination against women”.

He went on to state that subjecting girls and women to FGM violates a number of rights protected in international and regional instruments and national laws. These rights include; the right to be free from gender discrimination and the rights to life and to physical integrity. But argued that FGM reflects a deep-rooted inequality between the sexes and can be seen as extreme discrimination against women and girls.

The Commissioner argued that FGM is associated with  cultural ideas of femininity and modesty which include the notion that girls are ‘clean’ and ‘beautiful’ only after the removal of body parts that are considered ‘male’ or ‘unclean’. It guarantees premarital virginity and, since it is supposed to reduce a woman’s libido, helps her resist ‘illicit’ sex. The pressure of social convention tends to perpetuate the practice.

“While these explanations may be broadly interpreted to accommodate varying cultural views, it is clear that the practice violates the principles on what constitutes a child’s best interest and women’s rights. FGM is a violation of children’s rights because it is commonly performed upon girls between the ages of four and twelve who are not in a position to give informed consent”, he stated.

A Continent of Hope