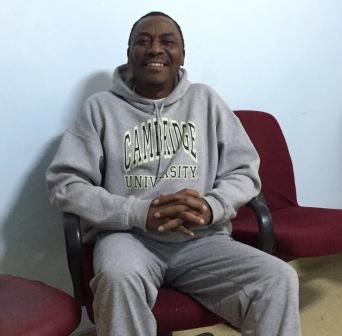 The Sierra Leone Embassies in Abu Dhabi and Tehran are closely following the status of their national who was detained in the Turkish capital, Ankara on Tuesday, 18 October, 2016.

David Junusa (pictured), a Sierra Leonean national who lives and works in Ankara was detained at the Kavaklidere Police Station in Ankara when he showed up to renew his expired residency permit.

Junusa, married to a Turkish national, studied in Ankara and after graduation, he has been working as an English teacher in different Turkish schools. But for the past four years, he was working at the recently closed Turgut Ozal University which allegedly belonged to the “Gulen Movement” – a movement led by US-based Islamic cleric Fethullah Gulen, who Ankara blames for the July 15 failed coup attempt in Turkey.

The detained Sierra Leonean was recently quoted by a Freetown –based local tabloid that he had an appointment on the 18th October to extend his residency permit and upon arrival, the paper further quoted him: “I was arrested and sent to the prison cell. I was told it was a direct order given by the president, to arrest and deport all foreigners working for those universities that were closed down by the government, and mine is one of them.”

Sierra Leone has no resident Ambassador in Turkey. The Sierra Leone Mission in Tehran – the Islamic Republic of Iran was covering Turkey over the past few years, but the Eurasian nation was recently transferred to the Embassy of Sierra Leone in the United Arab Emirates.

Speaking in a brief telephone from his Abu Dhabi office this morning, Ambassador Siray Alpha Timbo told me that his UAE Mission and that of Iran were working closely with Sozer Ozel, Sierra Leone’s Honorary Consul General based in Ankara to secure the release of the detained Sierra Leonean.

Ambassador Timbo is yet to present his Letters of Credence since Turkey was transferred to his Mission. But he was quick to say that, as a Sierra Leone Ambassador, the speedy release of his compatriot remained his top priority.

The soft-spoken diplomat says, he and his colleague in Tehran, Ambassador Almamy Amara Kamara, in consultations with the Foreign Ministry in Freetown, will continue to work diligently with the Turkish authorities through diplomatic channels to secure the release of their detained compatriot.

Latest reports from Turkey say, David Junusa was on Thursday, 27th October, 2016 transferred from the Kavaklidere Police Station to an Immigration Hostel (attached) in the city of Izmir – a city on Turkey’s Aegean coast.

Maada Bio's Vision for a new...