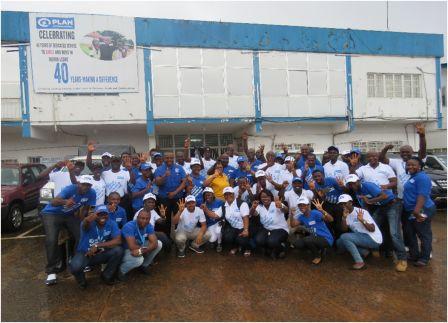 Child Sponsorship is Plan International’s core program in Sierra Leone and has sponsored thousands of children to reach their full potentials and contribute to national development. Plan International currently supports about 13,000 children and their communities in Moyamba and Port Loko Districts.

Plan International Sierra Leone had its largest Emergency Response during the Ebola outbreak with support from DFID; in which Plan provided much needed food and non-food materials to households in quarantine restrictions in the five operational areas and beyond; supported Ebola Treatment Centers and Holding Centers and supported Ebola affected household decontaminations and provision of replacement packages to decontaminated households. Plan International also in collaboration with the Office of the First Lady of Sierra Leone and the consortium of secret societies massively engaged traditional and cultural establishments in Ebola response on Ebola Resistant Behavior (ERB) Change Initiative which contributed to stopping Ebola through resistant behavior change processes at grassroots level and by engaging traditional and secret society leaders in Sierra Leone. Plan also responded to flood victims in Freetown, Bo and Koinadugu in 2015 with resettlement packages and many with new homes.

Plan International was awarded INGO Partner of choice in Child Protection in Sierra Leone during the Ebola response by the Ministry of Social Welfare Gender & Children Affairs in 2015.

Plan International’s new purpose is: “We strive for adjust World That Advances Children’s Rights and Equality for Girls”.

Plan International Sierra Leone has on the 29th September 2016 celebrated 40 years of operations in Sierra Leone. The celebration ceremony took place at the Country Office and in the Program Units or operational Districts.

The day started with the media presenting a surprise certificate of recognition for 40 years of dedicated service to Country Director, Casely Ato Coleman. The program units celebrated by bringing staff, former sponsored children and some partners and youth in their communities together in a joyful session.

Martha Lahai from Moyamba a former sponsored child and ex- Plan International staff, expressed delight in joining the celebrations. “Plan helped me get an education and become a strong woman today”. George Gbenga from Moyamba (Alumni Chairman) was very enthusiastic and filled with joy in his speech …“my whole life is centered around Plan International. “Plan started sponsoring me at the age of seven…my first visit overseas with Mrs. Murray as a young boy (to help raise resources after the war) changed everything. Plan staff inspired me to get a higher education, they believed in me…and now I have a Partner organization working with Plan…I owe a lot to this organization”.

AbibatuNgegba a member of the Youth Advisory Panel in her statement said that “I am that girl amongst many children and girls across communities, unreached areas, isolated and poverty stricken areas in Sierra Leone that you have unmeasurably supported in this 40 years”. She added that she is one of those children that Plan International took from poverty and positioned to a lime light of Hope. Abibatu said that she was broken and without future but now she can see light around her. “During the Ebola, I can reflect Plan International connecting me to other young people and world leaders to help fight the Ebola virus. I was lost in the midst of Ebola. I got lost when I lost my family and friends and when other girls were getting Pregnant. But today, I am a University student, so I can Learn, Lead, Decide and thrive. Invest in more girls (Vulnerable and excluded) and see if you will not reproduce more girls like me”. 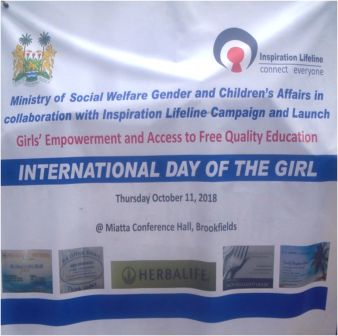