Facts about Sierra Leone: A Progress Report by Nanette Thomas 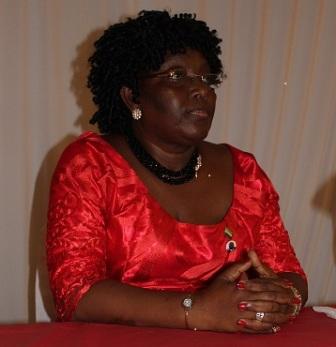 Facts about Sierra Leone: A Progress Report by Nanette Thomas

The Minister of Political and Public Affairs (MPPA), Ms. Nanette Thomas on Saturday September 24, made known in details to the Sierra Leone community in Texas about the  state of Sierra Leone on the economic growth, political, social well-being of the people, and the efficiency of public service delivery.

The Minister was unofficially invited as a Guest of Honor by the president of the All People’s Congress, APC-USA Dallas chapter, Mr. Sheik Daboh at the community annual fundraising event in the city of Dallas. Mr. Daboh, in his full of confidence, invited the minister to present on this year’s annual fundraising event to reenergize the group. Sheik Daboha believes that Nanette Thomas will be an eminent statesperson to speak on issues pertaining to our country.  He also has faith in the truth that Nanette Thomas has the artist’s sensitivity to people and situations.

Taking precedence of her invitation, Minister Nanette declined to attend other events prior to this APC event in which she was purposely invited for in Texas so that she can well prepared to highlight important issues and inform the community about significant progress the Sierra Leone government under president Ernest Koroma is making since its inception in 2007.

Delivering her powerful speech at Pastor Simpson’s Church, the entire audience listens intently and all attention was focused on the speech, the message she was going to bring to the community about the country as compare to the social media fallacies and propaganda against the government.

The MPPA said that, despite Sierra Leone ranked as the darkest city in the world before President Koroma’s administration took over power in 2007; this government, she said, has made an infrastructural planning that enhances the capital city of Freetown and the provincial headquarters of Bo, Kenema and Makeni the capability to meet its energy/electricity needs.

Honorable Ms. Thomas informed the Sierra Leonean community about the psychosocial effects of the Ebola outbreak on individuals, communities, and the economy in our country.  She said, after the country had gone through horrific civil war that took up more than 50,000 lives, the Ebola virus epidemic struck again to take up hundreds of lives again and vandalizes every facet of life. “This common enemy”, as she described the Ebola virus, attacked Sierra Leone at a time when Sierra Leone was on top of economic development and apparently evaluated by the United Nation as the fastest growing economy in the world. As a result of the two grave issues, our country’s economic growth became shattered; the healthcare situation worsens while president Koroma is striving to enhance economic performance.

However, the government of Sierra Leone under the dynamic leadership of His Excellency, Dr. Ernest Bai Koroma and its development partners are gradually rebuilding the economy to regain its blessings of 2013 and demonstrating a worth of trust to the Sierra Leone people.

The free healthcare service for under-5 children, pregnant women and lactate children is a prosperous endeavor she added.  The infant mortality rate is now falling down drastically as a result of the free healthcare. The Ebola epidemic has a direct disruption and destruction of our nation’s economy as well as our healthcare system, the minister said.

Ms. Nanette Thomas went on to explain to audience her duties and responsibilities as the first female Minister of her Ministry of Political and Public Affairs (MPPA).  She said, her ministry is charged with the statutory mandate to develop policies and programs geared towards promoting democracy and good governance in Sierra Leone through public and stakeholders participation in governance activities. When I assumed office in April this year, I made decentralization a priority as one of the pre-requisite for delivering the agenda for prosperity, the minister said. She believes that decentralization improves collaboration between government, the people, and the international community.

In a very short time since she took over the MPPA, Honorable Nanette Thomas made it possible to distribute the administrative powers to the provincial Head Quarters of Makeni, Bo, and Kenema with a view that her ministry could deliver the message and manage crises whenever it arise. I am very pivotal in coordinating capacity building of the local communities, advocacy for gender equality, the minister confidently asserted.

After delivering her keynote address, Sierra Leoneans in the city will now understand a clearer sense of the extent to which the government is exploiting the available resources with its uniquely accomplished target goal, Mr. Sheik Daboha said. Much of the allegations been made against the government have now been exonerated from so many people’s mind after the MPPA Minister had spoken, he added.

The event was full of participation by the community in different organizations.  Most notably were the opposition SLPP headed by Ms. Jestina Momoh, the Mandingo Association headed by Dr. Foday Christian Sesay, the great Tegloma Queen, Ms. Elizabeth Mamy Bockarie and the new established Mandingo Descendant Union head by Mr. Sorie Tejan.

Mr. Sorie Tejan, after careful consideration of the good deeds of Minister Nanette Thomas when she was in the States, he influenced his Mandingo Descendant Union to confer on the Minister to express his gratitude.

The Honorable Minister returns home and is expected to resume office later this week.