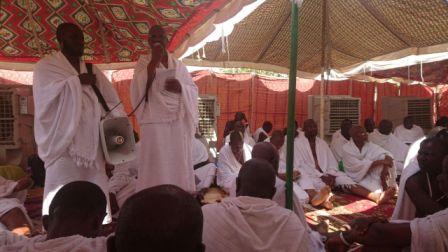 Sierra Leone’s Ambassador to the Kingdom of Saudi Arabia has on behalf of His Excellency the President; Dr. Ernest Bai Koroma, congratulated the Sierra Leone pilgrims on the successful completion of their pilgrimage (Hajj) rites.  (Photo: Ambassador Kargbo addressing pilgrims at Arafat)

Addressing the pilgrims at the Holy site of Arafat a few days ago, Ambassador Alhaji M.S. Kargbo says the President was very happy to learn that his people successfully completed their Hajj rituals without any hitches.

He commended President Koroma, Vice President Victor Bockarie Foh, and Chairman of the National Hajj Coordinating Committee, Alhaji Minkailu Mansaray for the facilities put in place for the pilgrims at a short time, after Sierra Leone’s absence in Mecca from 2014 to 2015 due to certain restrictions imposed by the Saudi authorities as a result of the Ebola scourge in the country.

The Ambassador also extended His Excellency’s appreciation to the Custodian of the Two Holy Mosques, His Majesty King Salman Bin Abdul Aziz al- Saud, the Crown Prince who is also the Deputy Premier, Minister of Interior and Chairman of the Supreme Hajj Committee, Muhammad bin Nayef bin Abdulaziz Al Saud and the entire Government and People of the Kingdom for the excellent facilities and arrangements put in place for use by the pilgrims in this year’s Hajj season.

He added that pilgrims performed the Hajj rituals with ease and comfort due to the excellent services and facilities provided to them by the Saudi Government. The Envoy conveyed the message of felicitation from the President, reiterating that the President had always been concerned about their welfare since they left the shores of Sierra Leone on 6th September, 2016.

The Ambassador appealed to the pilgrims to strive to maintain excellent relationship with their compatriots in accordance with the lessons of brotherhood, love and equality learnt during the Hajj exercise, emphasizing the fact that, the money, time, energy and constraints endured by them during the Hajj activities should serve as a frame of reference to put into practice all that the Hajj rigours demand. The Envoy urged them to endeavour to maintain their state of purity at all times both in their utterances and general comportment in the secret and in the open.

On behalf of the National Hajj Coordinating Committee, Chairman of the 2016 Hajj Team to Saudi Arabia, Alhaji Sheka Sahid Kamara who also doubles as Personal Assistant to the President on Social Affairs commended the pilgrims for a successful completion of their Hajj rituals.

He thanked them for cooperating with both the Hajj Mission and the Embassy since their arrival. He expressed gratitude to all Sierra Leoneans in the Kingdom of Saudi Arabia for providing adequate support to the pilgrims.

Alhaji Sheka also expressed his appreciation for the unprecedented services and facilities made available to pilgrims by the Ministry of Hajj and Umrah which enabled them to perform their Hajj rituals easily and hassle-free.

Shekito as he is commonly called, commended President Koroma for promoting religious tolerance in Sierra Leone and says the President “has always been able to cut across religious and tribal barriers in the country since his assumption of office in 2007.”

He described the President as a benevolent leader and expressed gratitude for the financial assistance the Head of State has been given to the pilgrims since Government took over the organization of Hajj in 2010, without discrimination.

President Koroma, the Presidential Aide reiterated, came from a dedicated Christian family, but his interest in the Muslim Community is second to no leader since Post- Independence Sierra Leone.

This is the first Hajj being attended by Sierra Leone since 2013 after the deadly Ebola outbreak which killed a good number of people across the country. About 800 Sierra Leoneans took part in this year’s Hajj, mostly women.

Hajj is the fifth pillar of Islam which is a mandatory religious duty for an adult Muslim who can afford it.