Legal Aid Board to launch, Access to Justice Campaign 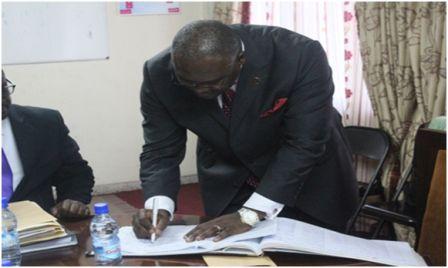 Legal Aid Board to launch, Access to Justice Campaign

The Sierra Leone Legal Aid Board in collaboration with the Office of the Attorney General and Ministry of Justice will launch the ‘Scaling Up Access to Justice Leaving No One Behind’ campaign at an elaborate ceremony on Thursday, September 8th in the forecourt of the Guma Building on Lamina Sankoh Street in Freetown. The campaign which is expected to attract over 120 civil society organizations will be launched by the Attorney General and Minister of Justice, Hon. Joseph Kamara.

According to the Executive Director of the Legal Aid Board, Ms. Fatmata Claire Carlton-Hanciles, the Attorney General has been honoured to launch the campaign to ensuring that remand inmates who had been literally abandoned at the Pademba Road Correctional Center are served with indictments.

Ms. Carlton-Hanciles said, the campaign will impact all citizens regardless of location and status.  She said the Legal Aid Board have been expanding its presence upcountry since August this year and the launch will coincide with the deployment of six lawyers who will  based in six district headquarter towns.

She said, each lawyer will provide legal services to the poor and vulnerable in two districts pointing out that the Board outreach officers and Paralegals deployed since August will step up legal education through community outreach events in every corner of the country..

According to Ms. Carlton-Hanciles, the campaign will see the setting up of Community Advisory Bureaus in Wards around the country. These Bureaus she noted will be the first port of call for members of the community who are in conflict with the law have law and other related issues. They will mediate cases which fall within their remit and the  will refer to the Police, Ministries Land, Labour and Social Welfare and relevant Institutions and organizations cases that should be tried in a court of law..

She furthered that the campaign will also include the implementation of the ‘Child Protection under the Law’ programme to assist enforcing the rights of children especially that which relate to the Child Rights Acts and the Sexual Offences Act. Adding that, issues of early marriage, teenage pregnancy and domestic violence will be a priority for the programme.

Ms. Carlton-Hanciles emphasized that even though the campaign will be led by the Legal Aid Board Aid, Trusted Partners from the civil society also have a vital role to play in ensuring the ceremony creates maximum impact.  ‘‘They will be involved in legal education and will also be empowered through training to mediate minor non-criminal offences within their respective organizations.’’ she noted.

Desmond Finney invited to The Gamb...