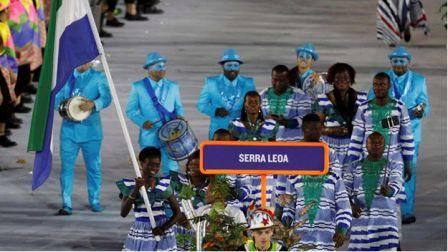 The team departs Galeao AC Jobim International Airport on Wednesday August 17 and are expected to jet down in Freetown on the morning hours of Friday August 19 on board Royal Air Marco.

Unlike previous Olympic Games, Sierra Leone performance in Rio was consider as better one and even the athletes believed their show in the Games has paved a new path for the country’s sports ahead of future international competitions.

For sprinter, Hafsatu Kamara who was the country’s high performer after she successfully qualified to round one in the 100m by winning her heat 1 with 12. 24sec, this year Olympic journey has ended but it has shown there is huge success for Sierra Leone in the future.

She said: “Although our journeys as athletes of the Rio 2016 Olympics Games has come to an end but a new pathway has been paved by us for sport development towards a better and bright future that will see us compete instead of participating in such Games.”

Young sprinter, Ishamail D Kamara who was the last to compete amongst the four athletes that made it to the Rio Olympics felt very disappointed for not progressing but believe if given an opportunity to live and train in an environment that will allow him to maximize his potential he will certainly perform well in Tokyo/Japan at the 2020 Games.

The team who is expected in Freetown on Friday include; swimmers Bunturabie Jalloh and Osman Kamara, home-based sprinter Ishmeal Dudu Kamara. Also included are both the swimming and athletics coach; Bobson Mansaray and Joseph Lahai.

Sierra Leone Olympian wants to use...