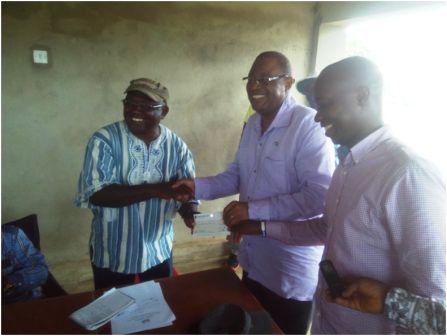 Amidst the rains and cloudy weather, the Minister of Agriculture, Forestry and Food Security continues to demonstrates government’s willingness to support farmers in its drive to achieve increased agriculture production and productivity as contained in the Presidential Recovery Priority on agriculture. The Minister was joined by representatives of the Parliamentary Oversight Committee on Agriculture, top Ministry Officials and other key stakeholders like the Chairman of the Sierra Leone Roads Authority Board; to present cheques to major cashew farmers in Kono and the Tayorgbo ABC Community Farmers in Tonkolili District. (Photo: PC Saque of Tankoro, receiving a cheque from Minister Jones and Hon. Koroma )

The Nimini Hills Cashew Farm project is owned and managed by a young Sierra Leonean, Toni Konomani who has cultivated four thousand cashew trees on a 57acres land out of 130acres in the Nimikoro Chiefdom. The project received a Le50million cheque from the Ministry as a support.

Also, Paramount Chief Paul Saquee of Tankoro Chiefdom was presented with a Le50million cheque by the Minister, Professor Patrick Monty Jones. The Paramount Chief has so far cultivated 53acres of cashew trees and 50acres of oil palm trees in his chiefdom.

The Minister, Professor Monty Jones said one of the objectives of President Dr. Ernest Bai Koroma is to promote agriculture Development in the country. He commended the Paramount Chiefs and other casher growers for taking the lead, which is in line with the President’s vision. “I am happy to know that all the Paramount Chiefs in Kono have agricultural projects” he said, and added that Ministers, Parliamentarians, Council Heads and other top officials must emulate such a brighter example, because, as he puts it, ‘food security is a must in Sierra Leone’. “Sierra Leoneans must do some form of agriculture in whatever area they find themselves,” says the Minister.

The current price of cashew and the demand for it has increased in the world market, which is why the government is supporting cashew farmers so as to catch up with other co untried like Ghana that are making lots of income from the commodity. The Ministry is expecting some investors from Germany in a couple of weeks that have shown interest to invest in cashew and other cash crops like cocoa and coffee. This is expected to addressing one of the general challenges highlighted by cashew farmers, which is marketing their produce.

“The potential is very great and the Ministry is willing to support farmers,” the Minister assured.

The recipients are not only engaged in cultivating cashew tree crops, they are also growing other tree and cash crops, and livestock rearing in order to develop themselves, communities and the country. They thanked the government for the cash and other major supports, which they confessed that are coming for the first time to them under Professor Monty Jones’ leadership. They however frowned at illegal bush burning, which normally affect their crops, and called on the government and local authorities to institute laws that punish defaulters.

Also, the Minister with his entourage took off from Makeni to meet with farmers in Mapaki Village, Taneh Chiefdom,  Tonkolili District.  The team visited the Earnest Bai Koroma Agriculture Development Farmers Organization at Gboran, Makarie Gbantie Chiefdom, Bombali District.  The farmer-based organization has a membership of 1,415 farmers. The team made their Final stop at Matheboi Town, in the Sander Tandaren Chiefdom was the Paramount Chief, the Honorable Member of Parliament, Hon. Sulaiman Sesay, Section Chiefs, stakeholders, farmers and all welcomed the Hon.  Minister and team.  The farmers in all areas visited took the Minister and entourage on a conducted tour of their farms. 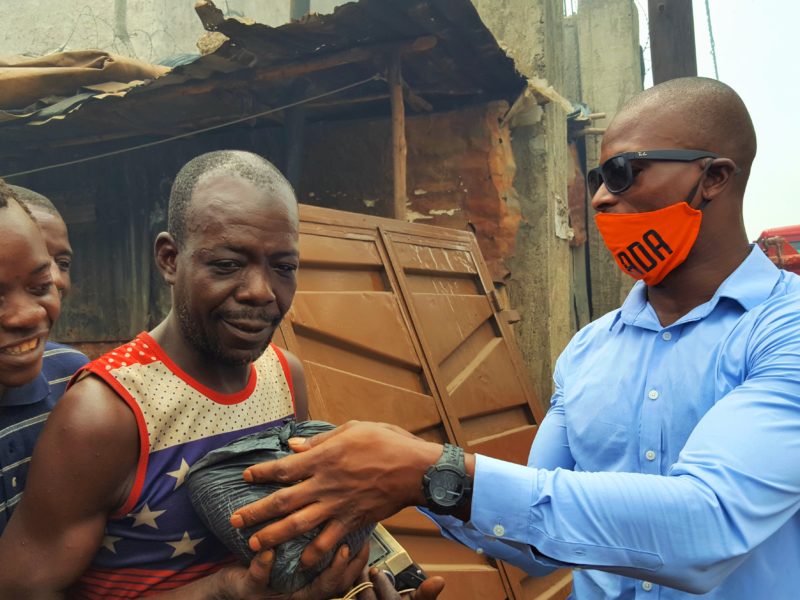