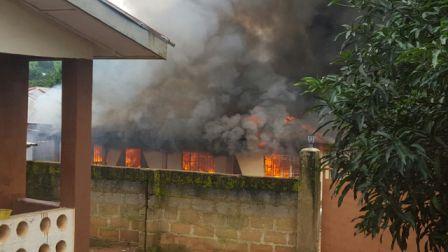 Youths of Kabala Town today 16th August 2016 went on the rampage in the township; describing their action as a form of demonstration against a decision they considered unfavourable to their district. According to information, their demonstration came about following information they allegedly received from whatever source or sources that there are plans to relocate the proposed Youth Village from Koinadugu District to Mile 91 in the Tonkolili District. According to the youths, that officials had earlier identified and accepted Koinadugu for the construction of the Youth Village with its full compliments of vocational skills training centre and agricultural facility.

The situation quickly degenerated to violence as the youths went on the rampage whilst the Police tried to contain the situation. As a response to the incident, the security sector met to assess the situation and the following decisions were taken with the view to restore normalcy in Kabala.

As of the moment, there are joint patrols between the Police and the Military and checkpoints have been mounted so as to monitor the movements of people and vehicles. Twenty suspects were arrested and now helping the Police with the investigation. The houses  of the Local Unit Commander and Police Constable Khallay (who is a Police Prosecutor in Kabala) were burnt down. The new All Peoples Congress (APC) and National Electoral Commission’s  (NEC) offices were partly burnt down whilst the District Officer’s office was vandalised.

Three people are confirmed dead (two still in Kabala Hospital awaiting postmortem examination and the other was removed from the hospital by the youths.).  Four are seriously wounded. Two of the injured are presently undergoing treatments at the Kabala Government Hospital and the other two were conveyed to Freetown Emergency Hospital for treatment.

Normalcy had seemingly returned to the township whilst the Police and Military continue to monitor the situation.

Friday is the day as civic funeral...