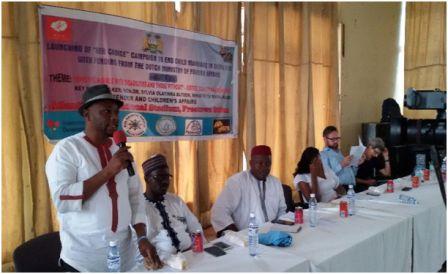 In his statement, the Member of Parliament encouraged the girl-child to always dream big for their future in national development.

The launch ceremony was organized by Children’s Forum Network (CFN) on the theme: “Invest in Girl with Disabilities and those without Justice, Equality and Human Rights” at the Atlantic Conference Hall, Siaka Stevens Stadium in Freetown.

Hon. Dr. Sho-Sawyer assured that Members of Parliament always endeavour to put strategies in place for the betterment of Sierra Leonean children in national development.

The MP expressed his appreciation to the organizers of the campaign which he described as timely and a loadable venture to ensure the children of this country to live to expectations.

He assured that the lawmakers will continue to provide support to and work in consonance with the organizers for the security of children.

Hon. Dr. Michel Sho-Sawyer however entreated the organizers to continue lobbying to the appropriate authorities including traditional leaders and law enforcers for the protection of children.

He called on children to pay greater attention to their academic work, improve on their status and think big as the responsibility lies on them, adding that if they dream big, they will think of becoming President, Doctors, Ministers, Directors and other honourable positions in the country.

In his keynote address, the Deputy Minister of Sports, Mr. Al-Sankoh Conteh, expressed delight that there had already been a tradition of organizations succeeding in campaigning against early marriage.

He maintained that the Government is against early marriage regardless of any status that could emanate from poverty and instability.

The Deputy Minister assured that the Government is making tremendous effort to eliminate early child marriage as it is spending huge amount of money on children, citing the establishment of several institutions in the country for the enrolment of the girl-child to substantiate his statement.

He therefore encouraged other civil organizations to continue their advocacy campaign against early marriage, adding that they should stop compromising those issues by prosecuting defaulters.

Other speakers included the Resident Minister East, Mr. Karamoh Kabba, representative from the National Youth Council, Dr. Abdulai Dumbya and a host of others.