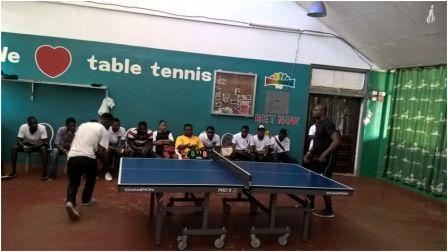 The week-long festival, “Tech Rhapsody 2016” which was a blend of academic, sports and cultural events organized by students of BlueCrest College successfully ended on August 6, 2016. (Photo: Students playing table tennis at the Siaka Stevens stadium)

The celebrations were inaugurated by the Deputy Acting Director of Inspectorate in the Ministry of Education, Science and Technology (MEST), Madam Nana Bockarie, and the Director of NCTVA, Dr. Mohamed Jalloh, who flagged off the event on a very high note for its success.

The entire week was packed with numerous events and every single event was executed with due diligence, dedication and honesty by the captain and volunteers. After the inaugural speech by the Guest of Honour and Country Manager of BlueCrest College, the students enjoyed a raffle game on August, 1. The raffle game was executed by the college’s Academic Head and the Finance Manager.

On August 2 and during the first session, the students participated in table tennis tournament at the Siaka Stevens Stadium, Brookfields in Freetown followed by other interesting games at the college campus.

On August 3, students enjoyed the pool tournament at Quincy’s Club, Aberdeen Village in the first session and then in the evening session wherein everybody was astonished to see the creative art exhibition by the students on the college campus.

On August 4, it was a complete academic day wherein the first set of students participated in a debating and literary competition followed by a quiz competition during the second session that was the main attraction of the day. The quiz competition took five rounds interjected by entertainment, sports, technology, history and general knowledge which was composed and executed by the expert trainer of BlueCrest College, Mr. Shyam Nair.

Deputy Director from the Ministry of Information and Communication making statement

The 5th day started with elocution competition wherein students exhibited their knowledge about subjects and the confidence to orate in forum. The second session was the main attraction for the day and everybody was excited about the fashion show, superb exhibition of smartness and confidence during the show. The event was judged by Ms. Winifred H. Kargbo, Ms. Munisha and Mr. Issa Bangura, all professionals from the industry.

On the final day, students participated in natural photography and selfie contest that actually generated loads of energy and humour amongst the students. The final event, “BlueCrest Got Talent” witnessed 50 participants.

Among the dignitaries that participated in the closing ceremony included the Deputy Director in the Minister of Information & Communication and the NCTVA Director, Dr. Mohamed M. Jalloh, who encouraged the students to sharpen their knowledge in ICT education and to also make people aware of the scope and ICT related opportunities in the country.

Authorities and students pose for the camera after the event

He praised BlueCrest for bringing world class ICT education in association with NIIT in Sierra Leone.

Other dignitaries were the Country Director of Schooling for Life, Ms. Sjierly Peirera, who expressed her gratitude to the college for the initiative as well as students the college sponsored from her institution.

She therefore motivated the students for their decision to study ICT as their chosen career.

Both distinguished guests handed over prizes to winners of several events. Token of appreciation given to the captains and volunteers for the events which were sponsored by Africell.