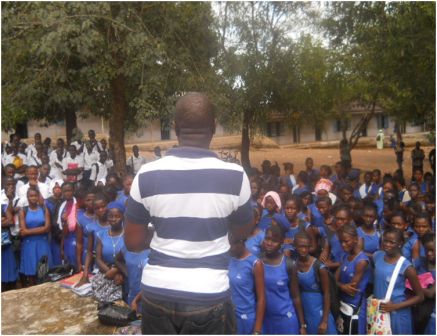 Addressing over 150 participants including drug users and commercial sex workers from various parts in Freetown, the Director of Sierra Leone Youth Development and Child Link, (SLYDCL) Habib T. Kamara, said the aim of the float parade was to reach out to those hooked on drugs.

He disclosing that WADPN-SL is currently reaching out to Government to push against punishing minor drug users but to consider them as a public health issue and commence prosecuting and jailing drug producers.

Mr. Kamara added that that the current national drug law was enacted by a certificate of emergency with the social and health aspects completely left out.

He called on Government to support the best practices the world is pushing towards targeting the supply chain and stop imprisonment of minor drug users.

The SLYDCL Director alerted the Pharmacy Board of Sierra Leone and Standards Bureau to regulate the circulation of Tramadol capsules and KADCO Bitter Kola (a locally distilled alcohol) as they are killing the youths, adding that both products are serious health hazards hence the reason why drug users are at risk of HIV/Aid and Sexually Transmitted Diseases (STDs).

He stressed that the Open Society Initiative of West Africa (OSIWA) cannot do it alone and therefore called on like-minded organisations to come onboard and support the initiative.

The National Coordinator WADPN-SL, Aiah Nabieu Mokuwah, said a pack of marijuana for three or six months’ imprisonment is not correct as the criminal justice system hinders youths on drug as majority of inmates in correctional centres are drug related crimes.

He pointed out that as a network, they are advocating for the decriminalisation of drug and the adoption of the use of condom.

Free HIV test and the distribution of condoms climaxed the event.