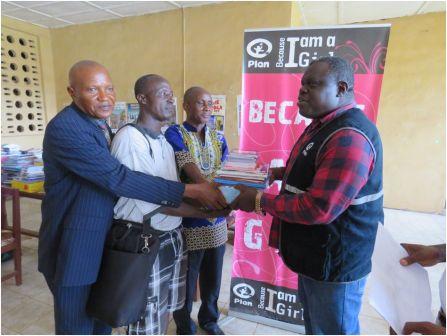 The donations started with Western Rural District at the Plan International Country office where 22 schools received books. The team proceeded to Kabala, Koinadugu District, where the donation took place on the 24th June 2016 at the conference hall of the Ministry of Education Science and Technology.

In Koinadugu District the Deputy Director of Education Abubakarr Kuyateh said that they are happy for the donation as they have a big challenge in supplying school materials to schools in the District.

The Deputy Director informed the team that, there are 570 schools in the entire district, and thanked Plan International as a leading International NGO partner to Government of Sierra Leone for extending operations to Koinadugu District. He noted the books donation as a major start of support reaching schools in the most deprived communities.

He pledged his Ministry’s support to Plan International and its program operations in the district.

The Acting Program Support Manager – Strategy and Program Development Mr. Joseph Konneh informed recipients that Plan International Sierra Leone received the donation of reading books for children (including story books) from BookAid International in UK to reintroduce the reading culture to children through a school lending library. In Koinadugu District, 26 schools were identified for the pilot stage. The books will complement the use of the core subject text books in schools.

Joseph Konneh encouraged the teachers to make the books available to the children and also solicit feedback from children returning borrowed books to ensure that they have made good use of them. He also assured his audience of Plan International’s commitment to supporting children in Koinadugu District.

After receiving the donated reading books, Samuel Koroma a teacher from the Alikalia Junior Secondary School, Koinadugu District thanked Plan International and partner for the donation and promised that they will do their best to make sure that the books are used and also encourage others to cultivate the attitude of reading.

Similar donations in collaboration with the District Directors of Education were done in other Districts: In Port Loko, on 28th June 2016 , 50 schools received the books. In Moyamba, 36 schools were supplied on 29th June 2016, in Kailahun , 35 schools benefited on 30th June 2016 and in Pujehun District, 19 schools identified received the donations on 1st July 2016.

Field Monitoring of schools in collaboration with District Supervisors of Schools will be coordinated by Plan International’s Program Unit Education Focal Points.  Plan will continue to promote the rights of children to education by encouraging a reading culture in marginalized communities in Sierra Leone. 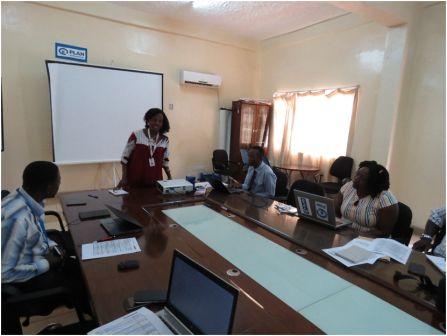