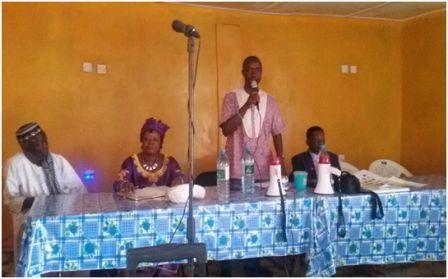 In his opening statement, Hon. Aaron A. Koroma said the donation was geared towards promoting and enhancing the educational system in Yoni Chiefdom in particular and the country in general.

The Member of Parliament described the gesture as a loadable venture and called on everyone at both home and abroad to contribute to the development of the chiefdom.

He maintained that several developmental programmes have been implemented in the chiefdom which he said have benefited the people one way or another.

The MP stressed that the US based YUSA has existed for a very long time assisting the indigenes of Yoni and its surrounding settlements through humanitarian support.

He added that during his recent visit to the USA, he met with some of the YUSA members and had fruitful discussions with them with regards the development of Yoni Chiefdom.

Hon. A.A. Koroma disclosed that they expressed satisfaction with the development strides being made in the Yoni Chiefdom and decided to ship three hundred chairs to enhance sitting accommodation for three identified schools.

Hon. Koroma praised the indigenes of Yoni Chiefdom for the unity among them and their contributions to development through concerted efforts, while he assured that he would continue to lobby and appeal to the appropriate quarters to ensure more development for his people.

He also promised to ensure more collaboration with partnership that would yield more dividends for the people, while he promised that the schools that did not benefit from the donation will benefit from the second consignment of chairs from YUSA.

The MP however cautioned the pupils and their school authorities to take good care of the chairs and use them for their intended purpose.

The erstwhile President of YUSA, Dr. Victor S. Kabia, said in his keynote address reiterated that the organization has existed for several years during which it has supported many projects in Yoni Chiefdom such as awarding scholarships to the less privileged and the provision of learning materials.

He also assured that the second consignment of chairs would benefit the schools that went without the largesse.

Speaker after speakers commended Hon. Koroma and YUSA for the donation, including Chiefdom Education Committee (CEC) Secretary General, Mohamed S. Kabia, Vice Principal Joseph S. Conteh of Yoni Bana Secondary School, who spoke on behalf of his colleagues, the Chiefdom Speaker, Pa Alhaji Abass Kamara and many others that showered praises on the MP and YUSA for the much needed donation.