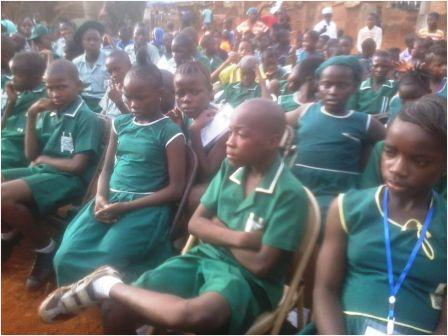 Humanitarian organization, Tangible Academic Youth Forum (TAYFO) and Foundation for Education and Dawaa (FEDDAW) in collaboration with the Cultural Consulate of the Embassy of the Islamic Republic of Iran (IRI) have engaged hundreds of pupils in a one-day seminar on the theme: “Unity of Islamic Community and the Benefit of the Month of Ramadan”.

Speaking at the opening ceremony, Chief Executive Director, TAYFO, Mr. Alieu B. Sesay, disclosed that the organization has existed for the last 14 years.

He said TAYFO has participated in many public affairs, including the training of election observers in collaboration with the National Elections Watch (NEW), organized remedial classes for pupils, and the introduction of young Sierra Leoneans to computer technology.

Mr. Allieu B. Sesay said the occasion was organized to not only remind children of the ethics of Islam, fasting or to be alert in reading their notebooks, but to also teach them to pay homage to their parents and teachers.

He explained their intention to offer scholarships to the best performing pupil in this year’s National Primary School Examination (NPSE) and pupils from Classes I-VI if they prove well in their promotion exams.

Mr. Sesay therefore encouraged the children to be committed to education which he described as the only way to success.

He also called on parents to forbid their children from watching pornographic movies and urged children to grab the opportunity and be part of the scholarship scheme.

“We will walk from school to school to search for the best behaving and most regular pupil,” Mr. Sesay assured.

Mr. Sesay recalled that recently, they distributed examination materials among NPSE candidates to motivate them take the exercise with all their minds.

Speaking on behalf of FEDDAW, the Secretary General, Mr. Mohamed Morlai Dumbya, who is the Deputy Chief Imam at the Masjid Qubaa Mosque, expressed gratefulness to the Creator for enabling them perform such an important task for the benefit of young and old Islamic followers.

He stressed on the way and manner the Muslim population has degenerated and noted that a group of believers came together in 2009 in one of the Mosques to form this organization as a means of finding lasting solution on how they could propagate Islam through preaching and learning of the holy Quran for the population of Muslims not to continue degenerating.

He described the organization as Muslim oriented with the aim of bringing young people together to exercise their rights in Islam.

Big Boost for Tourism Sector as 15...