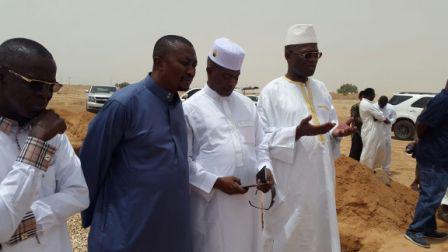 The remains of Assistant Liaison Officer of the Sierra Leone Embassy in Saudi Arabia were laid to rest at the Mansouriah Cemetery after a well-attended funeral prayers led by the Chief Imam of the Otaiga Grand Mosque in the South End of Riyadh, Friday, 27th May, 2016.  (Photo: The Ambassador and staff praying for the late man)

Mohamed Mustapha Sowa who was officially employed in 2007 died in active service on Sunday, 22nd May, 2016, at the Saudi German Hospital in the capital, Riyadh.

The funeral was attended by Sierra Leone’s Ambassador to the Kingdom of Saudi Arabia, Alhaji Mohamed Sillah Kargbo, Diplomatic and locally recruited Staff from the Sierra Leone and Liberian Embassies, Saudis and nationals from the West African States of Guinea, Liberia, Nigeria, Ivory Coast, Mali and a good number of Sierra Leoneans in Riyadh and from Jeddah, Saudi Arabia’s second and commercial capital.

The corpse of the late man being escorted to the cemetery

The remains of the late ready for burial

On behalf of the Government of the Republic of Sierra Leone, His Excellency the Ambassador expressed the Embassy’s deepest sympathy and profound condolences to the bereaved Sowa family for the irreparable loss.
.
He stated that Sowa’s death is not only a huge loss for his family, but also an immense loss to the Embassy and the Sierra Leone community in the Kingdom at large. “Our thoughts and prayers are with the family during this difficult time of mourning,” he said.

In his tribute, the Ambassador eulogized the late Mr. Sowa as a very hard working man who loved his job and also worked for the good of mankind in general. Mr. Sowa, he added, demonstrated honesty, dedication and exuberance to all duties the Embassy had assigned to him.

He thanked Allah for the great moments he shared with a fine gentleman. He prayed to Allah to give the late man’s family and friends the strength and fortitude to bear the great loss. He also prayed that Allah showers His bountiful mercy and forgiveness on the late man and grant him His highest paradise.

Speaker after speaker described the death of Mustapha Sowa as a great loss to the Sierra Leone Community in particular and the African Community in Riyadh at large.

They say, in terms of national service and generosity to his compatriots in particular and to other African nationals in general, he was second to none.

He will be remembered for his invaluable services not only to the Sierra Leone community, but other West African nationals as well. He will be sorely missed by all. He is survived by his wife, Iye Sowa and six children.

Has Coronavirus Reshaped Our Democracy?

The Truth about the Truth, Dressed in Ro...