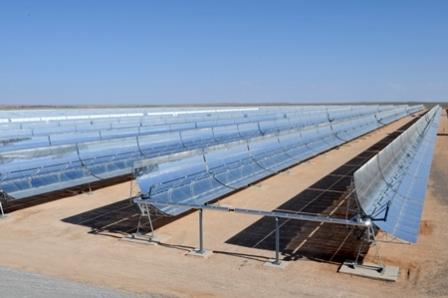 In Niger’s eastern region of Diffa in the south of the Ténéré Desert — a vast sandy area across Niger and Chad up in the Sahara desert — are the ruins of a century-old colonial fort. The area around it, an oasis called Agadem, is one of the sunniest spots on earth, behind only a patch in the middle of the Pacific Ocean around Hawaii and Kiribati Island, according to the US National Aeronautics and Space Administration (NASA).  (Photo: The world’s largest solar power plant in Morocco will eventually provide 1.1 million people with electricity  Photo credit: World Bank/ Dana Smillie )

From 1983 to 2005, data from NASA researchers showed that Agadem received sun radiation averaging a sweltering 6.78 kilowatt hours per square metre per day, enough energy then to produce electricity to heat water each day in a typical American home.

Niger, and by extension the Sahara desert, is like a giant solar panel, and now experts say the discovery will be a bonanza for the region’s energy prospects. Harvesting solar energy, including through the use of large-scale photovoltaic panel installations, could help power much of Africa.

However, except for the Ouarzazate Solar Power Station in Morocco, no other major projects have emerged to exploit the huge energy potential in the Sahara. To some extent the Nigerien case illustrates the paradox of a continent where relatively little is harvested although sun radiation abounds.

Africa has 7 of the 10 sunniest countries on earth: Chad, Egypt, Kenya, Madagascar, Niger, South Africa and Sudan. A few solar projects have sprung up in the last few years on other parts of the continent, and interest in building new projects has been growing steadily. But solar power development in Africa remains modest.

According to HIS Technology, a US-based economic and energy market research company, Africa’s total solar power–generating capacity, estimated at 312 megawatts in 2013, grew to 1,315 megawatts in 2015, and is projected to reach 3,380 megawatts by 2017—a tenfold increase over a period of four years.

Power shortages remain common throughout Africa mainly in the main urban centres, while vast swaths of rural areas have no electric power at all.

“Sub-Saharan Africa is desperately short of electricity,” the Africa Progress Report 2015, an annual publication of the Africa Progress Panel chaired by former UN Secretary-General Kofi Annan, reported in June 2015. “The region’s grid has a power generation capacity of 90 gigawatts (GW) and half of it is located in one country, South Africa,” the report added. That is less than the capacity in South Korea, where the population is only 5% that of sub-Saharan Africa.

Across sub-Saharan Africa, only a couple of countries, such as Togo, provide uninterrupted electricity supply all year round. As a consequence, the region is losing 2–4% of its annual gross domestic product. And while South Africa has half of all sub-Saharan electricity, residents have not been spared load shedding. The power blackouts negatively affect economic productivity, and the situation is expected to last through 2017, with the South Africa Reserve Bank anticipating a loss of 0.6% in economic growth in 2015 and 2016.

Droughts that affect hydroelectric dams, higher fuel costs that make it more expensive to run thermal generators, poor maintenance of existing infrastructure and lack of investments are some of the causes of the poor state of Africa’s power sector.

More than other countries, South Africa is looking at solar energy as part of the response to its power crisis. Installed capacity is expected to reach 8,400 megawatts of solar power by 2030, and an additional 8,400 megawatts of wind power. Several solar photovoltaics have been commissioned, including the 96-megawatt Jasper Solar Energy Project, one of Africa’s largest photovoltaic power stations, which aims at providing enough solar power for 30,000 homes. The country has ramped up production capacities in the last two years, and the growth accounts for about 90% of the jump in continent-wide solar capacity from 312 megawatts in 2013 to 1,315 megawatts in 2015.

Morocco is building one of the world’s largest solar energy projects, having launched its first phase in February 2016. At the same time, the country embarked on the second phase of the project, which, once completed by 2018, would provide electricity to 1.1 million people and cover 14% of the country’s energy needs by 2020.

With its Nzema project, Ghana was supposed to lead the solar revolution in the region. An ambitious solar farm about 270 kms from the capital, Accra, it was to go online in 2015 and generate 155 megawatts — enough to power 100,000 homes. It was designed to be connected to the national grid and to strengthen Ghana’s energy exports to its neighbours. Its promoters touted it as a game changer for Africa. However, four years after the project was announced, Nzema has yet to materialize. According to reports, construction of the plant will commence soon, with a possible completion date in 2017.

Delays continue to affect most of Africa’s solar projects. In West Africa it takes five to six years on average for a solar project to be completed, Doug Coleman, the project director for the Nzema solar plant, told Africa Renewal. In contrast, the average turnover in South Africa is 9 to 24 months. Both Mr. Berg of IHS Technology and Mr. Coleman point out that this is because the South African market is more developed and mature. “Elsewhere, policies and regulations are still being developed,” said Mr. Coleman.

According to the World Bank, market fragmentation, high transaction costs, perceived risks and the cost of capital are some of the obstacles holding back private investors.

Earlier last year the World Bank launched the Scaling Solar initiative to reduce “the development time and uncertainty for bidders and investors, while lowering tariffs for utilities.” The programme, managed by the International Finance Corporation, an arm of the bank, will offer tendering and financing expertise and help make privately financed projects operational within two years. As the price of photovoltaic panels continues to decline on the international market and as solar projects start generating profits, new renewable  energy markets will have a greater appeal for private investors, says the Bank.

In August the South African Council for Scientific and Industrial Research (CSIR) reckoned that the country saved the equivalent of $584 million — a tenfold increase over last year — from wind and solar energy just in the first six months of 2015. The CISR expects the savings to grow as more projects come online.

Fortunately, as Africa’s solar prospects continue to improve, several companies have shown interest in developing solutions. Last August, SkyPower, an American solar company, entered into an agreement with Kenya to build a gigawatt plant over the next five years.

“Such big announcements are very common,” Mr. Berg of HIS Technology says, however, they take time to materialize, if they ever do.

With other sub-Saharan African countries embarking on the solar journey, both the World Bank initiative and the South African experience show that renewable energy, despite today’s constraints, could have a bright future on the continent.

Mobile Registration for National I...