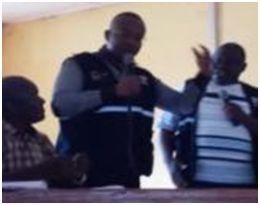 At a mammoth community meeting  held at the kabala community centre, key stakeholders of the district, including NATCOM chairman Mr Momoh Konte, Deputy Minister of Political &Public Affairs Hon. Femi Mansaray, paramount chiefs from the 11 chiefdoms and line ministry heads, District council and women ,children and youth groups were in attendance. The occasion was opened with cultural performance by traditional dancers.

The paramount chiefs and opinion leaders

The meeting was chaired by the Deputy Chief Administrator with a speech introducing the purpose of the gathering.  NATCOM chairman Momoh Konte, indicated the track record of Plan International in Sierra Leone for the past 40 years and said it was just timely that Plan expanded its operations to  Konadugu in the light of the many challenges in terms of development in the district.

In his speech, Casely Ato Coleman, Country Director of Plan International Sierra Leone, stressed that when he assumed duty 19 months ago, he prioritised an expansion of Plan into new districts and Koinadugu was one of those districts. He explained that Plan has indirectly started operations in Koinadugu as Plan’s Monitoring and Evaluation team conducted a child rights situation analysis in May, 2015 for the entire district. The study highlighted key child rights issues such as teenage pregnancy, early and force marriage, youth unemployment, poor enrolment and retention of girls in schools, access to improved sources of water, etc.

The Country Director said Plan International under the leadership of the Ministry of Social Welfare and Children Affairs is leading a coalition of organisations to harmonise the child rights and customary marriages and divorces act,  draft report is about to be submitted to the Minister. He indicated that Plan  responded to the Windstorm with 788 CI sheets (Zinc) to communities affected through the District council and Office of National Security(ONS) in October,2015

And most recently in November, 2015, Plan expanded the DFID Funded Girls Education Challenge Project in Five chiefdoms in Koinadugu through its implementing partner MATCOPS

The Country Director also informed the meeting that with support from Plan International Germany, Plan International Sierra Leone will from 1st July 2016, commence implementation of a 3 years project on Sexual Reproductive Health for Adolescence Girls and Female genital cutting.  He also indicated that Plan will partner with the Ministry of Youth Affairs to replicate the National Youth Farm concept in Masiaka in Koinadugu.

Finally he expressed appreciation to Momoh Konte, Governor of Bank of Sierra Leone and former Minister of Finance, Hon Kelfala Marah, the District Council Chairman of Koinadugu for their support in facilitating the entry of Plan into Koinadugu.

The Plan team had earlier paid a courtesy call on the Paramount chief of Shengbeh chiefdom, PC  Alie Balansama Marah III, as well as the District Council Administrator.

Picture of the main source of water in Bafordia; standing by is Deputy Minister of Political and Public Affairs, Hon Femi Mansaray

Amidu Mansaray I expressed his excitement and welcomed  the timely intervention of Plan International to Bafodia Koinadugu District, and assured of his support to work with Plan. The Country Director had earlier visited the only source of water to Bafordia which has been damaged and pledged to support the community to rehabilitate water facility.

Nanette Thomas could be a hero in...