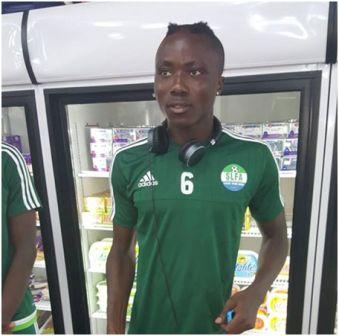 Sierra Leonean born Sajor Dengeh Jalloh, a defender, has caught the attention of some European teams for his signature but look set to pen down a contract with Malaysia KL United FC. After started his football career with Pa Saffa FC, the eighteen year old 18 sign a contract with GCP Sports manager Gbenda Charles who help him to Malaysia for his professional career.

During his time in Malaysia he was with KL United for trial but later impress after been involved in several friendly and test marches. Sajor Dengeh Jalloh has now been following closely by KL United officials for his signature that will hand him the chance to help the team achieved a successful season. “Playing for KL United will make me happy because of the opportunity given to me to prove myself” Sajor said.

Sajor was part of the Sierra Leone U-20 squad that played the 2017 Africa Youth Championship Qualifiers against The Gambia, despite Sierra Leone u-20 failed to qualify at the expense of the Gambia u-20. He was feature in the second leg when the baby scorpions of The Gambia hosted the Shooting Stars of Sierra Leone putting up an impressive performance. “I am very much proud to be part of the team (Sierra Leone u-20) and will always be willing to give my bet to the country I love so much; my called up was due to my hard work with KL United and would be please to be back for my country”.

Sajor is presently on holidays and has been involved in some training exercise as preparation for his expected contract and new football season. “I sported a great talent in Sajor and ever since he was improving a lot, we looking forward for a better offer and that will be good to help him pout” Gbenda Charles said.