Homepages
Your trusted place for Sierra Leone and global news
Trending News
HomeFeaturedWorld Bank, US Embassy and EU team up with Gov of Sierra Leone to improve fisheries sector

World Bank, US Embassy and EU team up with Gov of Sierra Leone to improve fisheries sector 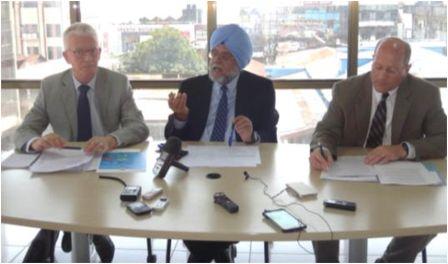 World Bank, US Embassy and EU team up with Gov of Sierra Leone to improve fisheries sector

Briefing the local media today during a joint press conference held at the World Bank office in Freetown, heads of the three missions recognized the huge potential and centrality of the fisheries sector to improving the revenue base of the country, and that they were collaborating with the Government to address the issues inhibiting the growth of the sector.

World Bank Country Manager, Parminder Brar, said as per the Bank’s assessment, Sierra Leone could sustainably generate US$186 million each year from fisheries; US$74 million of which can be generated from the industrial segment targeting high value species (demersal).

“If only 10% of this demersal section ex-vessel value could be captured in license fees, it would represent US$7.4 million per year for Sierra Leone’s public budget,” said Mr. Brar.

He further noted that license fees charged by Sierra Leone on fishing trawlers are low by international standards, and that currently the country receives only US$6 million annually in spite of having 94 trawlers registered to fish in the country’s territorial waters. Sierra Leone earns less than 1% of the ex-vessel value of the industrial trawlers despite the international norms being 5% to 8%. Liberia currently earns more than 10%, he added.

“The way forward for Sierra Leone is to increase the fee level while decreasing the total number of trawlers to revert to sustainable level,” said Mr. Brar. “Linked to this issue is the one of a sound legal framework. The current draft Fisheries Bill does not address critical issues and needs revision. Only then will it be able to transform the sector for the benefit of the country. A sound legal framework and a sustainable resource is the bedrock of encouraging private investment and depletion in the fishery sector in the country.”

A TV journalist posing some questions to the panelists

U.S. Ambassador to Sierra Leone, John Hoover, said for the fisheries sector to generate sustainable benefits to the people of Sierra Leone, the country needs a functioning surveillance system with an operational Joint Maritime Committee, empowered Community Management Associations, and good governance. “The Fisheries Management System needs to be effective and operational to prevent overfishing and depletion of the marine resources,” he said.

Head of the European Union Delegation to Sierra Leone, Ambassador Peter Versteeg, said efforts to fight illegal, unreported and unregulated (IUU) fishing in the country were insufficient and this has resulted in the European Commission taking a decision on April 21, 2016 to notify Sierra Leone of the possibility of being identified as a non-cooperating third country in fighting IUU fishing.

“This pre-identification or ‘yellow card’ requests the Government of Sierra Leone to engage in a formal dialogue with the EU authorities and develop an action plan that will open up the opportunity to carry out genuine reforms in the fisheries sector. So it is not a punishment to countries but rather to ensure compliance with international obligations.”