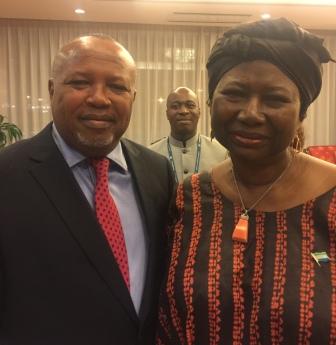 Beijing, China. 11 May, 2016 – Honourable Alimamy Philip Koroma has arrived in Beijing, China’s capital,  as Sierra Leone’s Ambassador  Extraordinary and Plenipotentiary to The People’s Republic of  China. He also comes with accreditation to several other counties in the South East  Asian Pacific.

He was received at the airport by Sierra Leone’a Deputy Ambassador Madam Kumba Momoh and staff over a dozen other colleague ECOWAS Ambassadors.

In his capacity as ECOWAS Dean, Benin Ambassador to China,  welcomed the new Sierra Leone Ambassador and assured him of their unflinching support. He said Ambassador Koroma’s  success would be the success of all ECOWAS Ambassadors.

Meanwhile, Ambassador AP Koroma, in a brief statement thanked his colleagues for their warm reception, also assuring them of his commitment and will to learn from them as this was his first entrance into the field of diplomacy. As such, he said, he sees himself as an apprentice.  At the regional level, he said ECOWAS Ambassadors should continue to push for the region’s  common position and  its agenda.

Today (12 May, 2016) he will present copies of his Letters of Credence and those of recall of his predecessor to the African Department, Chinese Ministry of Foreign Affairs. He is slated to present original letters to the Chinese President in a few days time.

It is time to abandon the prevalen...